Liberty celebrated the accomplishments of the following individuals during Commencement weekend: 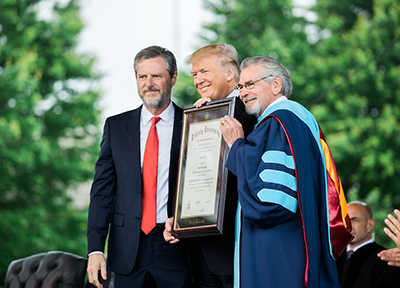 After introducing Trump as the keynote speaker for Saturday’s Commencement, Liberty President Jerry Falwell, along with Provost and Chief Academic Officer Dr. Ronald Hawkins, had the privilege of conferring an honorary Doctor of Laws upon the 45th President of the United States.

Falwell recognized Trump’s “commitment to his country and to the citizens who have been forgotten by their own government, his unwavering determination to make America great again, and his bold leadership of our nation.”

Trump twice spoke at Liberty’s Convocation, in September of 2012 and again to kick off the spring semester in January of 2016, when he was leading the race to become the Republican candidate for president.

“I decided in January 2016 that a man with these qualities who was willing to risk his business empire, his comfortable lifestyle, his reputation, and whose family was willing to sacrifice their privacy, all for the country they loved and for the benefit of the American people, was a man who should lead the United States of America out of its state of decline,” Falwell said. “His actions in the last four months speak for themselves — reaffirming this nation’s support for the state of Israel, appointing a conservative, strict constructionist justice to the Supreme Court, appointing more men and women of faith to his cabinet than any president in recent memory, bombing those in the Middle East who persecute and kill Christians, and earlier choosing Mike Pence as his running mate.”

Falwell also expressed his admiration for Trump for following through on his campaign promises.

“Just last week, he signed an executive order in the Rose Garden fulfilling a promise to return political free speech rights to churches, religious leaders, and universities like this one,” Falwell said. “This was the first issue he mentioned to me at the beginning of his campaign and, last week, he proved that he is a man of his word.” 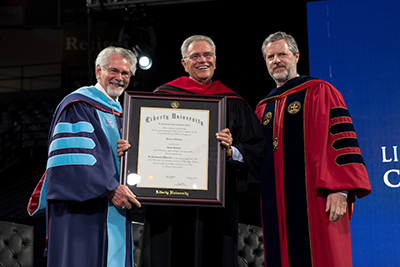 Since entering public ministry in the 1960s, Rev. James Robison has spoken to more than 20 million people in several hundred citywide evangelistic outreaches.

“The Rev. James Robison is one of the greatest orators of our generation,” Liberty President Jerry Falwell said. “I have fond memories from my childhood of his preaching in Lynchburg. His work through LIFE Outreach has literally saved millions of lives. He is an inspiration and a great friend to Liberty.”

The founder and president of LIFE Outreach International who co-hosts the daily television program LIFE Today with his wife, Betty, Robison is also the publisher and co-founder of The Stream, a lively and substantive source for U.S. and global news that champions the principles of ordered liberty, limited government, and human dignity.

Robison grew up in poverty and it gave him a heart for the downtrodden. In addition to evangelism, he has focused his efforts on feeding people in crisis situations, drilling water wells, establishing orphanages and schools, building homes for the homeless, and rescuing women and children from sex trafficking.

LIFE provides numerous resources for the homeless and needy in the United States and 50 other nations on six continents and has also partnered with ministries to battle sex trafficking and provide hope for victims in countries such as Cambodia, Thailand and India.

Robison was presented his honorary degree before delivering the keynote address at Friday night’s Baccalaureate. Robison also gave the benediction at the close of Saturday’s Commencement exercises. 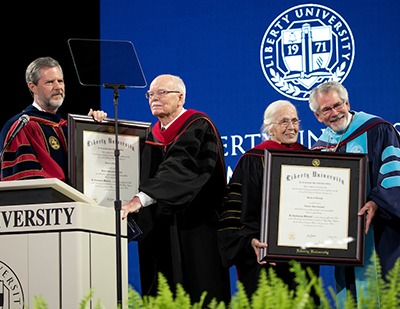 Surrendering to God’s will and following His plan for their lives, Wallace and Eleanor Turnbull felt the Lord calling them in 1946 to serve in Haiti, where they founded Baptist Haiti Mission two years later.

Liberty University founder Dr. Jerry Falwell Sr. visited them in 1954, at the age of 20, and the experience made an immediate impact that was evident throughout his life.

While in Haiti, Eleanor served the ministry by working with government and customs offices. Wallace worked in a variety of fields, teaching students, traveling to various congregations, and building churches and post-disaster housing for those in need.

Seventy years later, Baptist Haiti Mission has now planted over 350 churches and is involved in over 350 primary schools on the Caribbean island, with the ministry’s educational projects currently serving over 68,000 Haitian children.

In 2014, the Turnbulls were awarded a cross of Haiti’s highest honor by Haitian president Michel Martelly for their work. But their ministry has not been limited to the island of Haiti. As residents of Lynchburg, Va., they have provided scholarships through Liberty University and the Turnbull Family Foundation to Haitian students. Every recipient promises to return to Haiti after graduation to help the people there, as the Turnbulls did time after time to their adopted home away from home.

They were honored during Friday’s Baccalaureate. 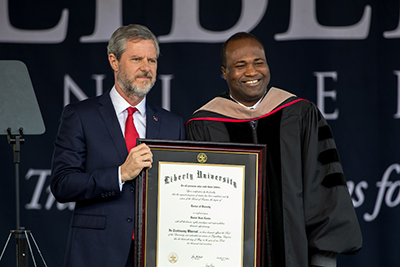 One of the recipients of the Turnbull Leadership Program scholarship, graduating from Liberty in 2006 with a Business Administration in Leadership degree, Daniel Jean-Louis is truly a Champion for Christ. He represents what Liberty University is all about — using professional knowledge and skills, in any career field, to honor God and make an eternal impact for His Kingdom in the lives of people all around the world.

He is the son of two of the only Christians living among peasant families who practiced Voodoo in Haiti’s Western forest and salt flats. His father was a pastor. When Jean-Louis completed his degree at Liberty and returned home, he recognized the chronic economic depression that gripped his country and decided to do something about it. He co-founded Bridge Capital, the first small and medium enterprise investment firm in Haiti, with the vision of providing loans and equity investment to expanding businesses.

Then, in 2011, he co-founded Trinity Lodge, a registered for-profit company that provides affordable short-term lodging within Port-au-Prince. From 2009-2014, he served as a country-level manager with Partners Worldwide, a non-profit organization, coaching and training businesses in eight cities in Haiti, as well as directing the “100,000 Jobs in Haiti Initiative,” which has a goal of creating 100,000 new jobs by the year 2020 by connecting and equipping non-governmental organizations and the Haitian business sector.

In March 2016, Jean-Louis published his first book, “From Aid to Trade,” which delineates the role of aid versus private investment in economic development. That sparked a campaign to raise awareness on the issue of aid and helping to propose key solutions for Haiti to transform its assets into entrepreneurial opportunity.

Jean-Louis believes the only way to end the global cycle of poverty is to empower people to meet their own needs profitably and sustainably.

Today, Jean-Louis is the CEO of Bridge Capital and a sought-after consultant. Recognized internationally as an expert on issues regarding the role of business in eliminating poverty, he has coached companies and non-profit organizations in Haiti — including World Vision, Oxfam, and Initiative Haiti/World Bank — and spoken in over 15 different countries, including Thailand, Ecuador, Guatemala, the Netherlands, Ivory Coast, and Jamaica, as well as at Notre Dame University, Georgetown University, and George Mason University.

Additionally, he has experience as a professor of entrepreneurship and development at Quisquéya University and the Haitian State University in Port-au-Prince.

He was honored before President Trump’s speech during Saturday’s Commencement exercises. 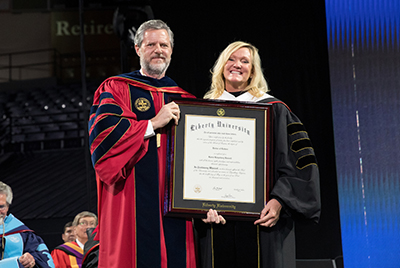 A No. 1 New York Times bestselling novelist and America’s favorite inspirational storyteller — with more than 25 million copies of her award-winning books in print — Karen Kingsbury is also an adjunct professor at Liberty University, teaching masters classes in English and on writing, publishing, and research.

Many of her novels are under development as major TV and motion picture films.

Kingsbury recently joined the No. 1 syndicated morning radio program, “Keep the Faith,” with her segment, “The Heart of the Story,” airing every day of the week. She is also a beloved speaker at several national events and one of Liberty’s most popular Convocation guests, encouraging her fans to love well, laugh often, and find a life of faith.

She and her husband, Don, are the parents of four Liberty students.

Kingsbury’s legacy will not only be her literary accomplishments, but her life story that continues to impact Liberty students as she uses her career as a platform to share the love of Jesus Christ.

Her honorary degree was conferred at Friday night’s Baccalaureate, where she addressed the crowd. 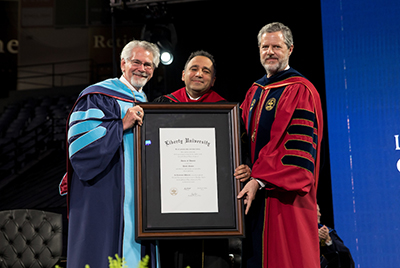 One of the nation’s foremost Christian leaders, David Nasser is entering his fourth year as Liberty’s senior vice president for spiritual development. He serves as campus pastor and steers the disciple-making process for students to come to know and grow in Christ, and then to go to the ends of the earth to be world-changers for His Kingdom.

“David is a gifted speaker with a passion for students,” Liberty President Jerry Falwell said. “He is an equally gifted visionary and pastor, essential qualities for leading our spiritual programs.”

Nasser was born in Iran but left the country with his family at age 9 during the Iranian Revolution. After almost a year in exile, his family moved to America. At age 18, he rejected his Muslim heritage and became a Christian.

He now oversees several teams under the Office of Spiritual Development that advance the university’s mission.

Nasser has a vision for each and every student at Liberty, “that these men and women will be great fathers and mothers, amazing husbands and wives, be devoted to their local church, be great community group leaders and volunteers,” he said. “Liberty is poised to raise up the next generation of leaders, so I want them to be future Supreme Court justices, missionaries, lawyers, doctors, who are going to reach the world for Christ.”