About 25 Liberty University faculty and staff took part in the Virginia 10 Miler and Four Miler on Sept. 25, held on the hilly streets of Lynchburg, Va.

Former Liberty track and field runner Kalib Wilkinson won the four-mile race with a time of 20:51.6.

Nearly 3,000 runners took part in the event, which included a children's race on Sept. 24. About 800 volunteers helped direct runners, hand out water and assisted at the finish line. Race officials said runners from 25 states took part in the event. Hundreds of Lynchburg's residents lined the streets of the course to cheer on the runners.

Liberty University Online was one of the sponsors of the races. 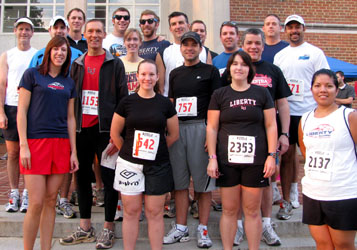 A group of Liberty University faculty and staff gather before
the start of the races.