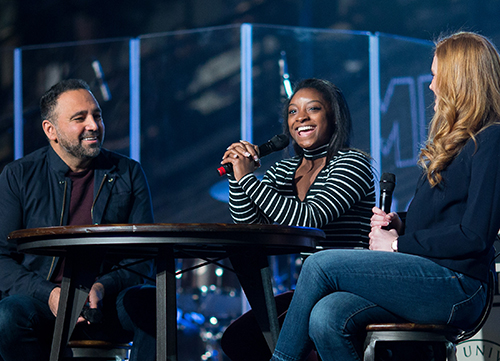 Four-time gold-medal gymnast Simone Biles has competed in front of large crowds of all ages, but on Friday, as Liberty University’s Convocation guest, the 19-year-old had the unique opportunity to share her story with over 10,000 of her peers.

She had recorded a message for Liberty students on social media Thursday night, asking them to send their questions to #simoneatconvo. She answered them Friday morning in a sit-down interview and Q & A in Liberty’s Vines Center. What did people her age want to know? Everything from her favorite food (Italian), favorite show to binge-watch on Netflix ("Vampire Diaries"), and spirit animal (a honey badger), to how it felt to represent her country at the 2016 Summer Olympics and how she integrates faith into her life.

Liberty President Jerry Falwell introduced Biles, noting that although 2016 had its difficult moments, watching her at the Summer Olympics in Rio was a highlight.

“It was so nice to turn off all the talking heads on the political shows and turn over to the Olympics and watch America’s gymnastics team dominate. It reminded me of Olga Korbut, Nadia Comăneci, and Mary Lou Retton — it was so wonderful to see America at that level again.”

Biles is the most decorated U.S. female gymnast ever, with 19 world medals (14 of them were gold). She was already considered the world’s greatest female gymnast before she even took the spotlight at the 2016 Olympics in Rio, where she won the lead prize of the competition — gold medal in the individual all-around — as well as gold medal in vault and floor, taking the “Final Five” to team gold. 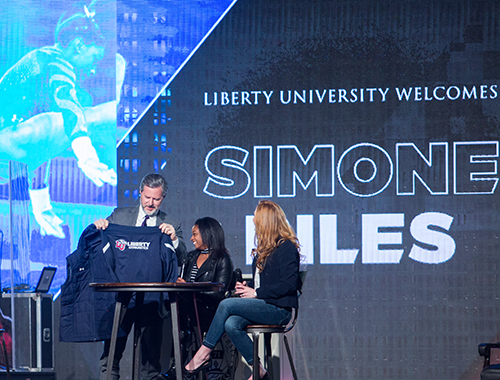 Simone first spoke about her experience in Rio, living in the Olympic Village with so many international star athletes and being chosen to carry the U.S. flag at the closing ceremonies.

“There were over 500 (U.S.) athletes, and they take a vote, and they voted for me. When I found out, I was super excited, but I was a little nervous to carry it because it was twice my size —10 feet tall. … I thought the wind was going to blow me over because it was so giant. Other than that, it was an amazing honor to be in the (Olympic) village, walking out on the balcony every morning, having everyone come there for the same reason — it blew my mind; I can never get over that.”

When asked what was going through her mind during the competition, she said, “It’s different because you guys look inside the competition and you watch it, but for us, we have been training our whole entire lives for this.”

“Don’t get me wrong, we do get nervous here and there,” she added, “but we do pray, and we go to each other and look to each other for motivation so we can hit all our sets. We feel like if one person hits it, it draws a line of perfection, and we try to keep that going.”

She said they heeded the advice of the national team coordinator, who told them before every performance that “no matter how many people are watching, it’s still the same routine we have to do.”

Biles, a professed Catholic, shared a close bond with her teammates, praying with them during events.

“Even on the Olympic team, we would all sit there and pray together, saying prayers to keep us safe, to keep us well, keep us focused. Even though we were different religions, we all prayed together; we found that special for us.” Her faith was also a theme in her official autobiography, “Courage to Soar,” released late last year.

The Olympic experience was also not without some special moments outside the arena, including a surprise visit from actor Zac Efron as the team was interviewed on NBC’s “Today Show.” The clip was shown in Convocation. 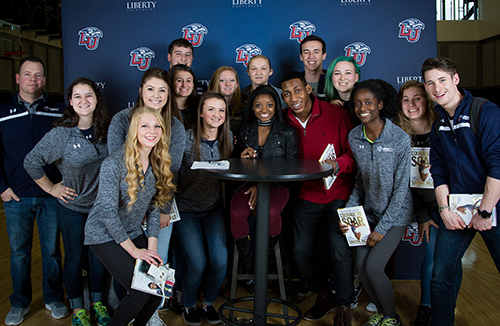 But a special group of students watching the Convocation could relate to Biles in even more ways than being college age or having a crush on a popular actor. Members of Liberty University’s gymnastics team viewed the event from the president’s suite at the top of the Vines Center and then had the chance to meet her afterward.

“It’s really exciting, but for us, because we’ve been in the sport for so long, it is such an honor,” said senior Ashley Grim, a member of the team. “We respect her so much; we understand her hard work and all her dedication to the sport and the long hours. We have never even trained as much as she does, but we understand how hard it is to be a gymnast, so especially at her caliber, it’s astounding.”

“When I saw that she was coming to Liberty, I was shocked,” said fellow team member and senior Jessie Hogue. “I couldn’t believe that they could bring her here. It is cool seeing our sport get recognition, and it’s cool to meet one of the best athletes on the Earth.”

Simone was presented with a Liberty Gymnastics jacket during Convocation.

“They are getting to meet potentially the greatest athlete of their sport — ever. She’s done more than any gymnast ever has and most likely ever will. Not to mention, she’s a humble, good person along with it,” he said. “The Convocation was amazing; it was good interaction with the crowd. To have someone the same age as most of these college students, it gives them the motivation to keep going with what they’re doing.”