Kaká, one of the most well-known soccer players in the world, told Liberty University students at Wednesday morning’s Convocation to take action, rather than just talk, when it comes to sharing God’s love with a hurting world.

The 34-year-old 2007 FIFA World Player of the Year, who played for Milan and Real Madrid before joining Orlando City in 2014 and being named MVP of the MLS All-Star Game in 2015, realized God had gifted him to play the sport at the age of 7. His career nearly came to an end before it really got started, however, when he fractured his head in a pool accident at the age of 18.

His doctor told him he should thank God to be alive, and Kaká agreed to sit on the sidelines and watch the championship game as he recovered from the injury. Eventually, Kaká was given the opportunity to play for a professional team. 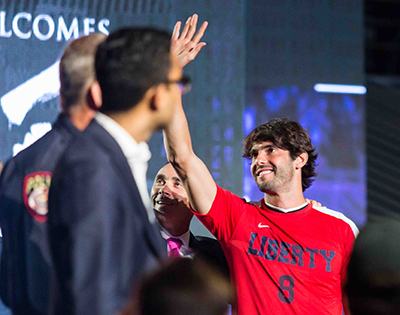 In front of a packed crowd, with international students cheering from the front row and Liberty’s men’s soccer team looking on from the President’s box, Kaká participated in a round-table Q & A moderated by David Nasser, Liberty’s senior vice president for Spiritual Development. He shared the stage with his pastor, David Uth of First Baptist Orlando.

“It’s a pleasure to be here and share what God has done in my life,” Kaká said. He spoke in Portuguese for much of the time, using a translator.

The primary subject of discussion was the aftermath of the June 12 shooting in Orlando’s Pulse nightclub that left 49 dead and 53 wounded.

“Orlando is a very calm city, but that week was very heavy week for all of us,” he said through the interpreter, noting that “Voice” singer Christina Grimmie was killed by a shooter in Orlando on June 11. “What impressed me most was how the city immediately got involved, got engaged, everybody. The city was mobilizing as well as the whole country.

“That truly, to me, is what Jesus would want us to do,” he added. “It was a way for us to use that moment, a tragedy, to show that love is more powerful than anything. Not just love that comes from the mouth, but a love that comes through attitude. You don’t only talk about love, you actually move. That’s love in action, and that is what truly makes a difference.”

Liberty students, faculty, and staff took part in helping to heal the city by partipating in the American Red Cross’ largest one-day blood drive in Central Virginia on Sept. 29. Nasser recognized donors, who stood in the crowd with shirts that read “Liberty loves Orlando.”

Kaká personally applauded those donors, who responded out of Christian love to help a hurting community.

Pastor Uth called Kaká one of “the most humble and gracious, most Christ-like” members of his congregation, and said God divinely brought him to Orlando for such a time as this.

Through his success and worldwide acclaim, Kaká has boldly proclaimed his faith, often ripping off his jersey after a goal to reveal a T-shirt that reads, “I belong to Jesus.” 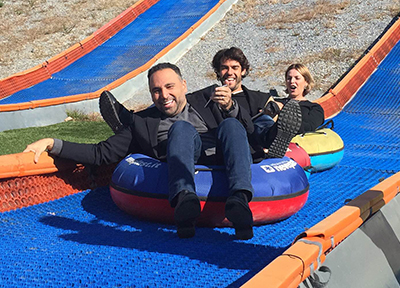 “I grew up in a Christian home and my parents always raised me by teaching Christian principles,” Kaká said. “After becoming a professional player, you end up becoming a celebrity, but I saw that I wasn’t really able to hide who I was. I remember people telling me, ‘You always talk about Jesus. You score a goal and you lift your hands up to the heavens.’ I I cannot deny myself. This is who I am. I tell them, ‘When I score a goal and I lift my hands up, I'm not saying it was God who scored the goal. It’s just a way of thanking Him for giving me this gift and also allowing me to do something that I love to do.’”

He encouraged students to seek God’s guidance when making important decisions that will affect their futures.

“I learned in my life the process of making a choice,” Kaká said. “I know many of you are in the moment of a decision … and I surely believe God can give someone a sign. I never really had powerful signs like fire coming down from heaven, but I always had peace in my heart. I made some important decisions in my life that enabled me to be where I am today. All of these decisions are based on God’s will for me, and that makes all the difference for me in this life of faith that I’m living.” 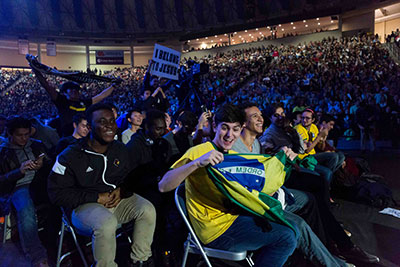 Kaká, the first athlete to receive 10 million followers on Twitter (he now has over 25 million), closed the service by signing soccer balls and kicking them out into the crowd before receiving a Liberty soccer jersey with his name printed on the back from Liberty President Jerry Falwell and men’s soccer Head Coach Jeff Alder.

Crowds of students, many from Brazil, rushed the stage at the end of Convocation to meet Kaká and have autographs signed and photos taken with him.

At the beginning of Convocation, illusionist Jared Hall gave the crowd a taste of what it can expect during a longer show at Wednesday night’s Campus Community service at 7:30 p.m. in the Vines Center before he flies to London on Thursday.