Theismann shared how after being named Super Bowl XVII MVP in 1983, when he led the Washington Redskins to the championship over the Miami Dolphins, his life took a radical turn.

“(In 1985) we were 4-4, and I wasn’t playing well,” Theismann said. “I had been consumed with the fact that I was great, that I was the reason we were successful. The team could not be successful without me, so I thought.”

He emerged from the tunnel for a Monday Night Football showdown with the New York Giants on Nov. 18, 1985, prepared to lead the Redskins back to the glory days.

“I said, ‘Tonight, your life is about to change, Joe,’” Theismann recalled. “Little did I realize I was into prophecy. My world was about to change like I could never imagine.”

After receiving a pitch from fullback John Riggins on a designed flea-flicker, a blindside tackle by Giants all-pro linebacker Lawrence Taylor left Theismann with a compound fracture in his lower right leg.

As he was wheeled off the field on a stretcher, 55,000 fans in attendance stood, applauding a man who “thought he needed absolutely no one … a man who thought he could do it all by himself,” Theismann said.

He was the fourth-highest paid player in the NFL at the time, in his first year of a five-year, $5 million contract. But he had lost sight of God and His blessings until the injury, which taught him to put others before himself.

“The Lord gave me athletic skills. He gave me the ability to throw a football. He moved me to the highest perch I could be at,” Theismann said. “But when I was there, the only thing that mattered to me was what I could get for me.”

Theismann said that he now realizes that he is merely a vehicle for God’s work.

“(God) noticed that I used those skills and was abusing those skills and it was time for me to not do that anymore, but to talk about the great graciousness of our loving Lord and the opportunities that He presents every day,” he said.  “The man who stands before you today, I hope and pray, is significantly different than the man that played professional football. You cannot, will not, nor ever hope to be a true success in life if you think you do it by yourself because the Lord is present in our lives. You cannot and will not survive in life if you don’t have a foundation and a belief. You can build the greatest monuments, but they will all crumble at the foot of the Lord because He is almighty.”

Theismann, who had provided game analysis for Super Bowl XIX, aired by ABC in January of 1985, didn’t stay down for long following his career-ending injury. After moping around for a year or so, he answered a new calling as an NFL color commentator for CBS in 1986 before launching his broadcasting career on ESPN’s “Sunday Night Football” from 1988-2005 and then on “Monday Night Football” in 2006. 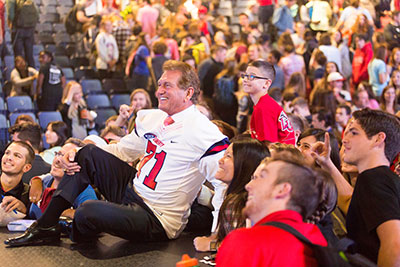 “We are all instruments of the Lord,” Theismann said. “We’re here to serve a purpose … to serve the Lord. We’re here to … work together to serve His greater good.”

Theismann challenged the Convocation crowd — which he considered more lively and energetic than many he played in front of during his football career — to live out their dreams and change the world.

“You all hold the future for us in your hands,” he said. “To be here at Liberty, to learn, to grow, to develop relationships, to understand different people … you are, truly, what the world will look like and is today.”

He encouraged students to apply what they learn to shape their future, and to write down their professional, personal, financial, and spiritual goals.

“You’ll be amazed at how your life starts to go in that direction because it has direction,” Theismann said.

Citing Proverbs 1:7, “The fear of the Lord is the beginning of wisdom,” he called students to commit their lives to God and embrace their education.

“If you’re not willing to learn, you’ve got no chance,” he said. “That’s why you’re here. Your classes right now are your work. Commit to them. Be passionate about them.”

With it being Homecoming Weekend, Theismann concluded his talk by reflecting on eternity and on his daughter, Amy, who died March 29 at the age of 43.

“May God bless you and keep you safe in His arms.”