As a rising senior at Oberlin (Ohio) College with a sports writing job lined up after graduation, ESPN analyst and founder of K.I.N.G. Ministries Chris Broussard felt an unexplainable sense of emptiness.

“All my life I was taught to reach for the American dream, to get good grades so you could go to a good college, go to a good college so that you could get a good job,” Broussard told Liberty University’s Convocation crowd assembled on Monday morning in the Vines Center during a Q & A session moderated by Liberty Men’s Basketball Head Coach Ritchie McKay. “And now I had the promise of that and I began to think, ‘Man, is this it? There’s got to be more than this.’ And I knew it was Christ, but I kept running.”

Raised in a religious family, Broussard went to church every Sunday, but didn’t know the Lord personally. As a sophomore, he started dating a born-again Christian, Crystal, who would eventually become his wife.

“She introduced me to biblical Christianity,” Broussard said, recounting how going to her church was a different experience. “Everybody was just excited and happy to be worshipping God, which I had never seen before.”

Broussard was challenged to surrender his life to Christ, but resisted at first.

Finally, a few months later, after having an internship and full-time job offer with the Cleveland Plain Dealer newspaper, he reached the end of himself and accepted the Lord on his 21st birthday.

“God just broke me down to the point where it was either, ‘Keep running and be miserable or give your life to Christ and find some peace and some joy,’” Broussard said.

Now, nearly 27 years later, Broussard is at the top of his game as one of ESPN’s most respected NBA analysts, following the Cleveland Cavaliers’ run to their first championship this past season. He is even more vested in the lives of his wife, Crystal, now a doctor, and their 18-year-old twin daughters, Alexis and Noelle.

However, his greatest passion and investment in the Kingdom of God may be as founder of K.I.N.G. Ministries, designed to be a support system to the church by strengthening men in their walks with Christ.

“I’m excited about how Christ can impact individuals and families and communities and our country,” Broussard said. “In my heart of hearts, what I’d love to see is a spiritual awakening and a revival in America.”

As an African-American, he sees the problems that plague blacks as a people in this society, including fatherlessness and poverty as well as systemic obstacles such as racism.

“But I also know that if we can get men to sincerely follow Christ, we can alleviate a lot of our problems we have that are holding us back,” Broussard said. “That’s one reason that I founded the K.I.N.G. movement. Ultimately, it’s for men of all races. We hope to help others as we all push for unity in the body of Christ across racial, denominational, political, and generational lines … to spark this spiritual awakening.”

He referred to the Lord’s Prayer as a focal point to start the transformation, but noted it will require faith in action as well as prayer by God’s people to see it happen.

“I believe, as with any prayer, if you pray to pass a test, you’d better study, too. If you pray to get a job, you’d better apply for a job. If we pray for God’s Kingdom to come, we should use our opportunities, our talents, our gifts, our intelligence, whatever God’s given us, to try to have be done here on earth as it is in heaven,” Broussard said. 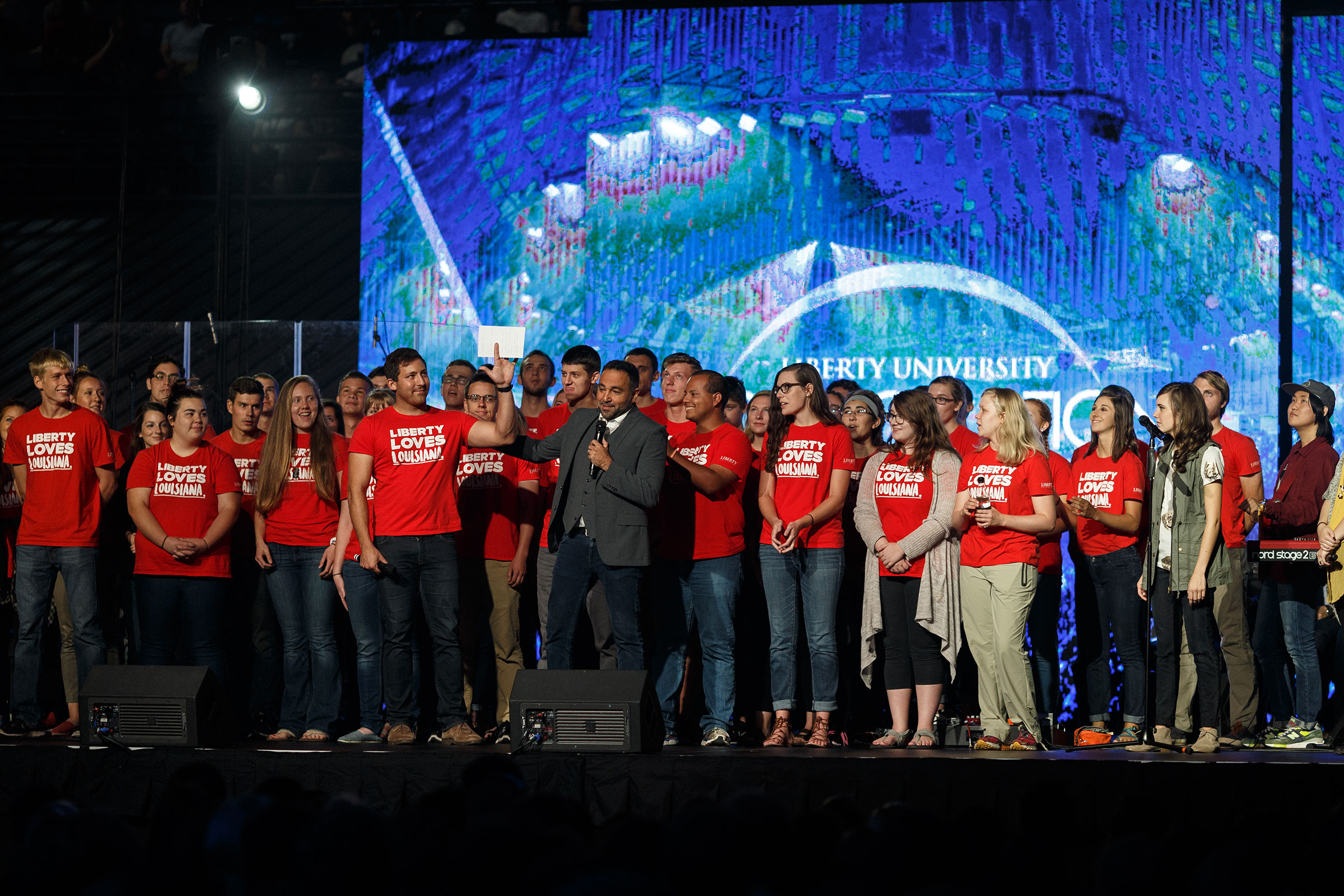 While showing a video from that team’s trip, the 51-member LU Send Now group that drove 16 hours on Sunday to return from last week’s trip took the stage. They were introduced by Vincent Valeriano, the LU Send Now coordinator who shared of the impact the team made, both physically and spiritually, in the lives of those affected by the flooding. He said nearly 100 people gave their lives to the Lord in the aftermath of the destruction.