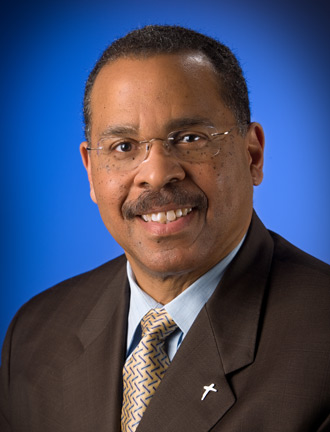 A visiting professor at Liberty University School of Law has hit national best-seller lists with his political book about the motives of the Obama administration.

The Honorable Kenneth Blackwell is the co-author of “The Blueprint: Obama's Plan to Subvert the Constitution and Build an Imperial Presidency.” Released in April, the book reached No. 5 on the Washington Post’s hardcover nonfiction bestseller list and No. 1 on its politics books list in May.

At Liberty, Blackwell teaches in the areas of public policy, government and international human rights.

A noted conservative leader, Blackwell has been a frequent guest on network and cable news and public affairs programs, including Fox News’ The O’Reilly Factor and Hannity, CNN’s Crossfire and Inside Politics, MSNBC’s Hardball with Chris Matthews, and PBS’ The Jim Lehrer Newshour and Tavis Smiley Late Night.

His public service includes elected and appointed terms in local, state and national government. He was elected as the youngest mayor of Cincinnati. In 1994, he became the first African-American elected to a statewide executive office in Ohio when he was elected treasurer of state. He has served as an undersecretary at the U.S. Department of Housing and Urban Development under Secretary Jack Kemp and was a U.S. ambassador to the United Nations Human Rights Commission.

Blackwell serves as a Senior Fellow for Family Empowerment at the Family Research Council and is a contributing editor for Townhall.com, with his columns appearing in the Wall Street Journal, Washington Times, New York Post, American Spectator, American Thinker, NationalReview.com and FoxNews.com.