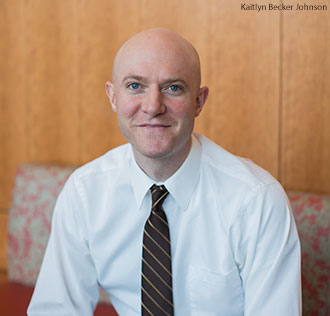 Dr. Christopher Seitz, an assistant professor in Liberty University’s Department of Public & Community Health has received a six-month grant from the Fulbright Scholar Program to conduct research on health issues and teach at University College Cork in Ireland.

The Fulbright Scholar Program is the flagship international educational exchange program sponsored by the U.S. Department of State’s Bureau of Educational and Cultural Affairs and administered by the Council for International Exchange of Scholars, the scholar division of the Institute of International Education. About 800 awards are issued annually, enabling scholars to teach and conduct research in over 140 countries.

Seitz, who has taught at Liberty since 2014, will specifically be performing a photovoice project. He will provide his students with cameras, which they will use to photograph their environment to document issues regarding the campus tobacco policy. At the end of the project, students will have the opportunity to hold a photo exhibit on their findings. During the exhibit, students who participate in Seitz’s project will advocate for tobacco restrictions at the university, working to ban smoking on campus grounds.

Seitz said he first developed an interest in tobacco policies after watching his grandfather die from lung cancer.

Seitz said that he is “honored” and “humbled” to receive the Fulbright award.

“I will have the opportunity to collaborate with some of Ireland’s premiere researchers in tobacco control,” Seitz said. “That collaboration will benefit my students at Liberty University. I am passionate about getting undergraduate students involved in research. I plan to take the projects I work on in Ireland back to Liberty and have my students work with me to finish the research.”

In 2014, Dr. Michael S. Jones, an associate professor in Liberty University’s Department of Philosophy, was awarded a nine-month senior scholarship from the Fulbright Scholar Program to teach and conduct research in Romania. Additionally, Cheryl Walton, a graduate student who was pursuing a Master of Arts in Management and Leadership, taught English in Malaysia on a Fulbright student grant.

The Law School has constituted a 12-member Fulbright committee made up of faculty members from different departments and chaired by Dr. Barry Moore, to review and evaluate Liberty students Fulbright applications. For more information about the application process, contact Udobong at eudobong3@liberty.edu.