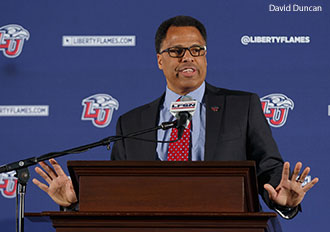 A familiar face is returning to roam the sidelines of the Vines Center as Director of Athletics Jeff Barber announced today the hiring of Ritchie McKay as Liberty University’s head men’s basketball coach.

After spending the last six seasons working under Tony Bennett as associate head coach at the University of Virginia, McKay returns to Liberty Mountain where he served as head coach during the 2007-08 and 2008-09 seasons.

McKay was welcomed back to Liberty today during an afternoon press conference held in the Club Pavilion of the Williams Stadium Tower.