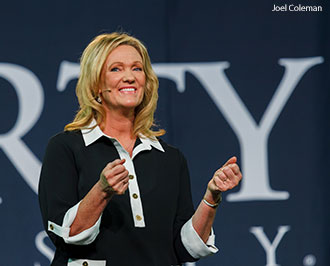 Liberty University has announced a partnership with #1 New York Times bestselling author Karen Kingsbury, welcoming her as a visiting professor for the school’s residential and online programs. Exclusive to Liberty, Kingsbury will offer students the secrets to her storytelling and to selling more than 25 million copies of her books.

“I believe in Liberty University and in the students who attend this great school,” Kingsbury said. “I am honored to officially be part of the great things God is doing at Liberty.”

Kingsbury will contribute to the university’s English and creative writing programs and provide writing curriculum exclusively to Liberty University. This will include teaching about story development, marketing, and publishing through both written pieces and video instruction. In addition, she will frequently visit the campus to teach hundreds of students, beginning in February and again in April.

“We are thrilled to announce this partnership with Karen Kingsbury,” Liberty University President Jerry Falwell said. “Karen is one of the most important voices in Christian publishing and literature today. We are excited about all she has to offer our students and our Liberty community.”

Over the years, Kingsbury has become a favorite guest of Liberty University. Students have heard her speak in Convocation, telling her personal story from the stage and inspiring them in much the same way she has inspired millions around the world through her books. Students have also connected with her as a Liberty parent — three of her children (and a nephew) are current students.

Kingsbury will interview Liberty students for her weekday radio program, “The Karen Kingsbury Show,” which launched last year. The radio show is currently heard on Liberty’s newly reformatted radio station, The Journey FM, throughout Virginia and North Carolina, as well as nationally on Salem Radio and TodaysChristianMusic.com. As a public speaker, Kingsbury reaches more than 100,000 women annually through various national events.

Kingsbury will visit Liberty’s campus Feb. 23-25, and again on April 7-10, during College for a Weekend. In addition, Liberty will work with Kingsbury for the Karen Kingsbury Liberty University Scholarship contest, which will award four students each $20,000 toward tuition. Details of the scholarship competition will be revealed on Kingsbury’s website, KarenKingsbury.com, in the coming weeks.

“I’ve always believed if Heaven has a university, it would be Liberty,” Kingsbury said. “I wish every student would have the chance to attend this amazing university.”

Ron Kennedy, Liberty’s senior vice president of Marketing, said Liberty is excited to be able to draw from Kingsbury’s professional talent to advance the mission of the university in Training Champions for Christ.

“The partnership between Liberty University and Karen Kingsbury is a natural fit,” Kennedy said. “She has been a longtime supporter of the university and our mission, and we expect her to be a part of the growth we anticipate here in the coming years.”

Kingsbury has been hailed by Time magazine as the “Queen of Christian Fiction.” She is a #1 New York Times and USA Today bestselling author, earning her the distinction of America’s favorite inspirational novelist. More than 25 million copies of her award-winning books are in print worldwide. Kingsbury has been married to her husband, Donald, for 26 years. They live in Nashville with their five sons, three of whom are students at Liberty — Sean, Josh, and EJ. All three were adopted from Haiti in 2001. Their oldest son, Tyler, began his collegiate career as a member of Liberty’s LU Praise team. Their youngest son, Austin, is a junior in high school, and their only daughter, Kelsey, is married to former Liberty alumnus and Christian recording artist Kyle Kupecky.