Dr. Ronald Godwin honored for his years of service to Liberty 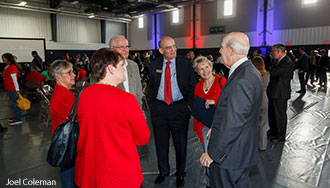 Liberty University leadership, including the Board of Trustees, celebrated the legacy of Dr. Ronald S. Godwin at a special reception on Friday. Godwin, who most recently served as provost and senior vice president for academic affairs, announced his retirement during the university’s All-Faculty Meeting last month.  Godwin served Liberty for more than 20 years in varying roles. He will remain a consultant to the university.

As provost and senior vice president of academic affairs, Godwin was the primary voice on academic matters within the administration. He has overseen incredible growth not only in the campus and its facilities, but also in the scope and quality of academic offerings. Over the years, Godwin has worked directly for the president via many of the university’s affiliated ministries. He was instrumental in the development of Liberty’s distance learning program, helping Liberty pioneer online programs for higher education.

President Jerry Falwell and interim provost Ronald E. Hawkins shared words of appreciation for Godwin’s many contributions, along with a video that highlighted Godwin’s career with both Liberty and the Moral Majority. Members of Liberty’s current and previous faculty and staff spoke about their fond memories. Falwell and Hawkins presented Godwin with gifts on behalf of the university, including a watch bearing Liberty’s seal, a custom golf club, and three nights at a resort.

Falwell explained that as a close friend of his father (Liberty founder Dr. Jerry Falwell), Godwin became like an uncle to him early in life while Godwin served as executive vice president of the Moral Majority. But as President Falwell succeeded his father in leadership he shared how Godwin provided him with invaluable support.

“I have learned so much from your business acumen and from your general perspective on education that is really unique in the world,” Falwell said to Godwin, noting that his abilities as both an academic and a businessman are a rare and powerful combination. “Liberty University was the beneficiary of all those skills; I was the beneficiary; I am deeply indebted to you.”