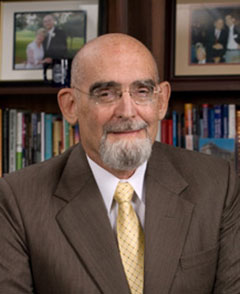 Liberty University President Jerry Falwell announced Monday that Dr. Ronald Godwin will be retiring at the end of this month. He will remain a consultant to the university as the school prepares for its next accreditation report in 2015.

The announcement was made during the university’s All-Faculty Meeting.

Falwell honored Godwin for his more than 20 years of service to the university in varying roles.

“We knew Ron Godwin had the business acumen and academic credentials necessary to help us create something unique in all the world here, with our online programs, and with the growth we’ve experienced in our resident program,” Falwell said. “In late 2010, when he became provost, he helped build a Provost Office that has to be one of the most flexible. To oversee and manage the rate of growth that we’ve experienced in recent years in an academic office is no easy task. Ron has used his academic and business skills to take Liberty to a new level, a level we never thought was possible in such a short period of time.”

As provost and senior vice president of academic affairs, Godwin has served as the primary voice on academic matters within the administration. He has overseen incredible growth not only in the campus and its facilities, but also in the scope and quality of academic offerings. Over the years he has worked directly for the president via many of the university’s affiliated ministries. He was instrumental in the development of Liberty’s distance learning program, leading Liberty as a pioneer in online programs for higher education. The Provost’s Office not only develops and implements the academic vision of the university, but is also involved in analyzing ways to reduce costs and increase revenue. Since May 2014, programs initiated by Godwin — including foreign conversational language courses as well as other online and residential initiatives — have resulted in a $9.1 million net gain.

Godwin received his B.A. from Bob Jones University, his M.S. from Old Dominion University, and his Ph.D. in Post-Secondary Planning and Management from Florida State University.

Godwin said that with both university academics and finances in excellent condition, he felt that he made the decision at an opportune time. He said he looks forward to being able to spend more time with his family.

“Things are in great shape. With things in this kind of order, it is a good time for a transition,” he said. “I am leaving the academic affairs of the university in excellent shape and under the continued leadership of a strong team made up of Dr. Ron Hawkins, vice provost; Dr. Kevin Corsini, dean of the Graduate School; and Dr. Ben Gutierrez, administrative dean for undergraduate programs. Great leadership remains in place here and I’m excited. It’s the right time for me to transfer from my role as provost to serving as the consultant to the president.”