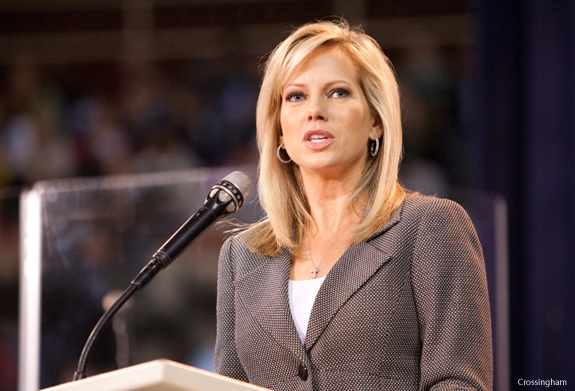 FOX News reporter and Liberty University alumna Shannon Bream addressed students at Wednesday’s convocation, encouraging them to be proud that they will enter the working world as LU graduates.

“Liberty is like no other place in the world,” she said, noting that she never shies away from telling people where she went to school.

Bream works out of Washington, D.C., where she covers Supreme Court hearings and other policy issues for FOX. She also has been seen on FOX hosting “On the Record with Greta” when host Greta Van Susteren is absent.

Chancellor Jerry Falwell, Jr. introduced Bream on Wednesday by telling a story about hearing her on the radio on Election Day. Falwell said he and his wife, Becki, were traveling from Richmond, Va., back to Lynchburg when they heard Bream reporting on the New Jersey governor’s race that received national media attention.

Bream, who graduated from LU in 1993 and has worked at FOX’s Washington, D.C., bureau since 2007, said she is “blown away every time I return to Liberty.”

“It just does my heart so good to see what God is doing here.”

Bream shared stories of her time at LU, from not calling her parents for two weeks when she first arrived on campus, to a life-changing mission trip she took to Brazil. She also talked about her struggles. She said she spent a lot of time trying to impress others and had a lot of self-doubt, but the support and care she received while at Liberty helped direct her life.

“I firmly believe that everything I learned at LU helped me be who I am today,” Bream said.

On Wednesday afternoon, Bream delivered a presentation in the Liberty University School of Law’s Supreme Courtroom, detailing her path from law school to FOX News.

After completing her undergraduate degree from LU, Bream earned a Juris Doctorate with honors from Florida State University College of Law. But after joining a firm in Tampa, Fla., Bream discovered she did not have a passion for practicing law.

“I was a square peg going into a round hole,” she said.

After visiting a local TV station, Bream realized that she wanted to become a journalist. She said she took a “leap of faith” and left the firm to take a job writing scripts for a morning news show.

“I was learning by trial and error,” Bream said, whose career has led her from Florida to Charlotte, N.C., to Washington, D.C.

“God can lead you down a lot of paths … He’s leading the show,” she said.