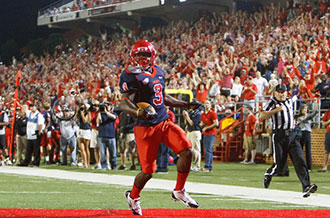 Former Flames Football player Kevin Fogg is the second Liberty University standout cornerback from the 2013 squad to join the Miami Dolphins' roster this year as he signed a free agent contract with the NFL franchise yesterday.

Fogg joins his Flames' defensive backfield teammate Walt Aikens in Miami. Aikens was drafted by the Dolphins in the fourth round of the 2014 NFL Draft in May.