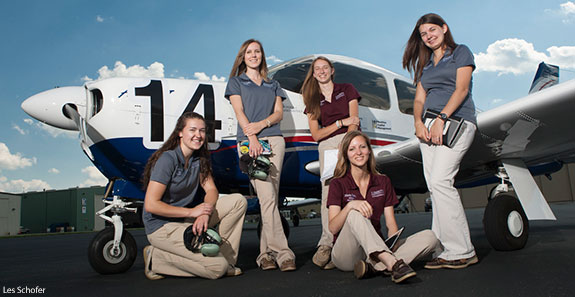 Liberty Belles pilots (from left) Alicia Isacson, Melody Lynn Dowlearn, Megan Grupp, and Jessica Dyer, who also coaches the team, and dispatcher Ariana Knight pose in front of one of the Piper Arrows.

The race traces its roots to the 1929 Women’s Air Derby, in which 19 female aviators, including Amelia Earhart, flew from Santa Monica, Calif., to Cleveland, Ohio.

Two of Liberty’s aviators — Megan Grupp, the Liberty SOA Pilot of the Year, and Liberty Belles’ coach, Jessica Dyer — are ARC veterans. Dyer placed ninth overall last summer, flying with Charity Holland in a low-wing Piper Arrow. They earned the Fastest Piper award and finished fourth out of the 13 entries in the Collegiate Challenge. Grupp and Jodi Jacob placed 22nd out of the 33 planes that completed the race, using a high-wing Cessna Skyhawk.

The other Piper Arrow 28-R201 will be piloted by the tandem of Alicia Isacson, a rising senior, and Melody Lynn Dowlearn, who will graduate in December, both newcomers to the event.

The team left Sunday from Lynchburg and arrived in California on Tuesday, making a couple of overnight stops along the way and visiting the Grand Canyon after flying over it.

On Monday, beginning at 11:30 a.m. EST, the 50 ARC-registered planes will launch in a staggered start from Buchanan Field Airport in Concord, Calif. The race takes the aviators, who range in age from 17 to over 70, across 11 states before officially ending before sunset on Thursday near Harrisburg, Pa.

“You can’t take off before sunrise, and you can’t arrive after sunset,” Dyer said, noting planes are not permitted to fly at dark or through severe storms. “You can’t go into Instrument Flight Rules. You have to be able to see the ground and have good visibility.”

It’s not the first plane to arrive at the destination that is declared the winner; it is determined by total flight time. The race is open to fixed-wing aircraft ranging from 100 to 600 horsepower with a handicap system leveling the field.

Dyer and Grupp are both certified flight instructors (CFIs), Dyer with Liberty and Grupp with Freedom Aviation, Liberty’s fixed-base operator at Lynchburg Regional Airport. They said they complement one another well with their competitive drive and attention to detail in their pre-flight preparations.

“We’re both kind of take-charge by nature and we both really want to win,” Dyer said. “We’re both experienced CFIs so we trust each other’s decision-making a lot, and we’ll do whatever it takes to get the other person on their game and focused.”

Dowlearn and Isacson said they may alternate between piloting and navigating their plane from day to day, whereas Grupp will operate the controls full time for her team while Dyer is in charge of plotting the course, including airspeed and altitude, alerting the pilot to any obstacles in their path, and communicating by radio with each airport’s tower.

Ariana Knight, who for the second year in a row is serving as dispatcher from out of the Liberty SOA offices, said both flight teams will stay in communication with each other, but will devise their own race strategies and plan their own itineraries.

“A lot of the race comes down to airmanship,” Knight said. “It’ll come down to who makes the best decisions regarding winds and routes and avoids things like thunderstorms that will force them to land and add time. It’s up to them to figure out what the conditions are and what are the best choices to make that result in the fastest route.”

“Thunderstorms are a huge factor, especially over the Rocky Mountains,” Dyer added. “The night before each race day, we’re going to take a hard look at the weather. The way you’re going to win is to get the best winds possible.”

From Friday through Sunday in Concord, Calif., participants are required to attend pre-race briefings that cover fuel planning, weather, fly-bys, and emergencies.

The two aircraft had a combined 100 hours of maintenance performed on them by Freedom Aviation’s mechanics the week before they left for California.  “The airplanes are in top shape” according to Young.

“Everything will be as safe as possible and as smooth as possible as they fly out there and back,” added Knight, who will be on call throughout the race to provide in-flight weather updates and on-ground logistical support.

“Of course, we want them to compete well, but above all we pray for safety as they race across the country,” Young added. “Godspeed, Liberty Belles.”