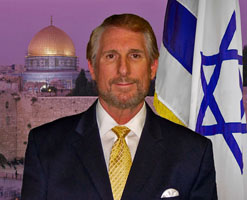 Christian Broadcasting Network’s “The 700 Club” recently featured Liberty University’s Dr. Randall Price in its newscast on Friday, April 18, during which he discussed archaeological discoveries made on the ancient settlement of Qumran, the site of the Dead Sea Scrolls community.

Price, a distinguished research professor at Liberty and the executive director of Liberty’s Center for Judaic Studies, was the director of the excavation highlighted in the report. He reviewed significant pottery finds at the Qumran site, which points to evidence of the Qumran community’s connection to Jewish traditions and observances such as the “The Messianic Feast.”

As a leading authority on biblical archaeology, Price has been the director of excavations on the Qumran Plateau in Israel since 2002.