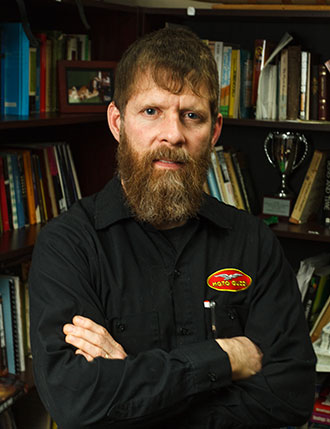 Dr. Michael S. Jones, an associate professor in Liberty University’s Department of Philosophy, has been awarded a nine-month senior scholarship from the Fulbright Scholar Program to study in Romania. He will continue his research — which already earned him a one-year junior Fulbright scholarship to the country in 2000 — on the work of renowned Romanian philosopher Lucian Blaga.

The Fulbright Scholar Program is the flagship international educational exchange program sponsored by the U.S. Department of State’s Bureau of Educational and Cultural Affairs. About 8,000 awards are issued annually, enabling scholars to research abroad. Cheryl Walton, a first-year Liberty student pursuing a Master of Arts in Management and Leadership, is currently overseas teaching English in Malaysia on a Fulbright Fellowship.

Jones was awarded the Senior Fulbright Scholarship to teach courses in philosophy of religion and ethics at the University of Bucharest. The scholarship will also allow him to finalize his translation of Blaga's last book, “The Historical Being.”

Jones and his wife, Laura, a student in Liberty’s Doctor of Education program, will travel to Bucharest, Romania, in September. While both plan to focus the majority of their attention on their scholastic work — Laura will be working on a dissertation about the integration of Roma children in the Romanian school system — they also plan on spending time in ministry.

Jones has taught philosophy and theology at Liberty since 2005. As a graduate student, he first began teaching during a short-term mission trip to Fetesti, Romania, in 1998. It was during that trip that he developed an interest in Blaga’s works. Two years later he was awarded the junior scholarship.

During his first Fulbright-sponsored time in Romania, Jones researched his doctoral dissertation, which has been published by Fairleigh-Dickenson University Press as “The Metaphysics of Religion: Lucian Blaga and Contemporary Philosophy.” He is eager to further his study at the post-doctoral level. Jones considers Blaga’s philosophy important to study because it argues for the existence of a significant being while appealing to a rationalistic approach to the principles of reality.

“I see in his philosophy things that resonate with theism, which I find very appealing, yet he argues for his position in a way that is almost secular — it does not presuppose the existence of God or the inspiration of the Bible,” Jones said. “It is a great philosophical work that presents a reasonable and rational explanation for the whole of reality that culminates with the postulation of the existence of a being like God.”