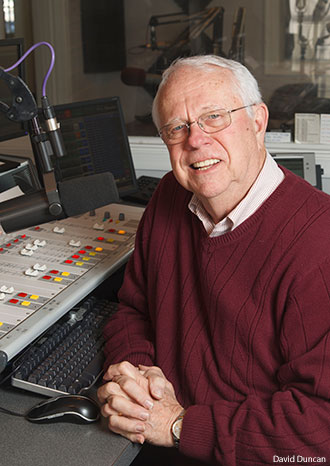 After 33 years at the helm of Liberty University’s WRVL Victory FM, Jerry Edwards recently announced his retirement from his position as general manager. Edwards’ last day was Jan. 31.

Edwards came to Liberty in 1980 to attend Liberty Bible Institute, for what he assumed would be just two years. He was offered a temporary position at the new radio station in 1981 and eventually became host of “The Morning Full of Music” show.

Edwards’ son, Mark, production director at Victory FM, credits his father for growing Victory FM from a single, 50,000-watt station to a regional network with 25 full-power and translator stations.

“My father’s main role was building the network to what it is now, where you have coverage over most of Virginia and a large portion of North Carolina,” he said.

Another important part of Jerry Edwards’ work was reaching out to students interested in broadcasting and offering them hands-on opportunities as board operators, disc jockeys, or summer interns. Edwards considers this ministry to students and their careers the principal accomplishment of his time at Liberty.

“To have had some input into their lives and have given them some direction and a lot of encouragement and a love for the industry would probably be one of the proudest things that I’ve done,” Edwards said.

Edwards also played a central role as the “Voice of the Flames” for the Flames Sports Network for 29 years and was inducted into the Big South Hall of Fame in 2012. He stepped down from that role in 2010.

President Jerry Falwell, Jr. expressed his gratitude for Edward’s commitment to the university and Victory FM during a retirement celebration on Feb. 17.

“Jerry Edwards is one of the heroes who helped make Liberty University what it is today,” he said. “Not only did he faithfully serve as director of WRVL-FM, he donated countless hours for over 29 years serving without pay as the play-by-play radio announcer for both home and away games. He spent the last seven years of his career at WRVL adding translator stations that expanded the coverage area of the radio station to most of two states. The multi-million dollar investment by Liberty to buy the translators has already been recouped by the station. Jerry is loved and respected for his humility and his positive upbeat attitude. We are forever grateful for his sacrificial service to Liberty University.”