Liberty University once again dominated the corporate team competition, taking first-place honors in the women's category for the 10 Miler (finishing nearly seven minutes faster than Centra) and in both the men's and mixed categories for the 4 Miler.

Team Liberty also took home second-place awards for both the men's and mixed categories in the 10 Miler (behind Areva) and for the women's category in the 4-Miler (behind Centra).

More than 270 Liberty University employees and students participated in the 40th annual Genworth Virginia 10 Miler and 4 Miler races, as well as a 4 Mile Walk, in downtown Lynchburg on Saturday, more than tripling the number of members last year. Team Liberty was the second largest team in the corporate entries, following Centra.

The Virginia 10 Miler is one of the oldest 10-mile races in the country and draws runners from all over the world. This year, more than 4,000 registered to participate in the racing festival. The event also featured the Amazing Mile Children’s Race.

Senior Khristina Kanagy, a member of Liberty’s cross country team, was the fastest runner in her age group for the 10 Miler and placed 71st overall, out of a field of 1,479 runners. 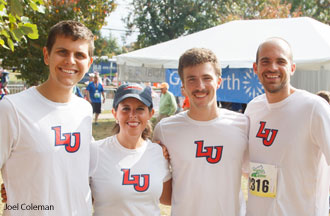 Also at the race, Liberty University was announced the winner of the 100 Mile Challenge for total miles. The challenge was part of the citywide Live Healthy Lynchburg campaign and participants were encouraged to run or walk 100 miles between July 1 and Sept. 27. Liberty staff logged 22,321 miles.

On Saturday, Team Liberty member Matt Henry, who works for the Center for Curriculum Development, said he discovered his love for running after exercising for a fitness test his doctor had ordered.

“I fell in love with running while getting back in shape for a fitness test and found a technique that worked for me,” he said. “I came to run today to support the university and for overall good health and to have a good time.”

Sarah Quigg, a junior education major, runs various races on campus offered by Student Activities and decided to participate in the 10 Miler. 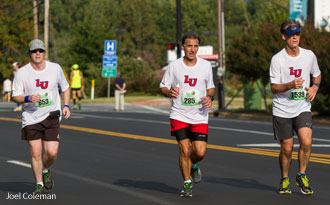 “I really enjoy running, and it is a great community event in which Liberty students are joining the community and running,” she said. “It is a great way to chat with people and form new relationships.”

Brandon Roehm, a senior business major, decided to run the race when a professor encouraged him. Roehm has previously participated in a 5K, 5 miler, and a half marathon, and he is currently training for a marathon.

“I came out to run and to have a fun team environment with the school and everybody cheering you on,” he said. “The run the last two miles is brutal going uphill but other than that it is a nice pace going uphill and downhill.”