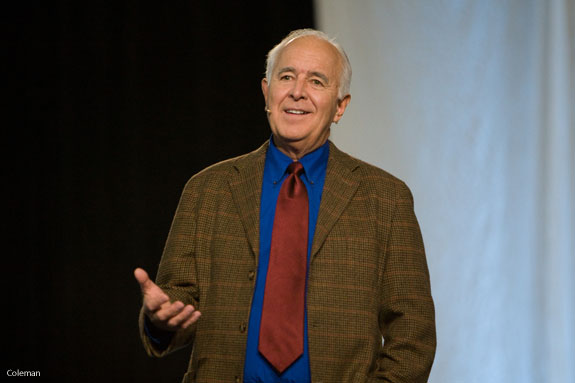 Gary Smalley, one of the country’s best-known authors and speakers on family relationships, gave Liberty students some premarital advice at Monday’s convocation service.

Smalley, who has written several books on marriage and is now hosting his popular “I Promise” marriage seminars nationwide, said it took him 38 years of marriage (he has been married 43 years) to learn to stop trying to change his mate.

“When I stopped becoming the Holy Spirit for her, I saw her change,” he said.

Smalley, 67, said it wasn’t until he talked with his son, a psychologist who now mentors him, that he began to realize this truth. The things he had been trying to change in his wife never helped their relationship.

“The reason why you cannot try to change your mate ever is because a secret to a great marriage is safety,” he said. “You cannot have a connected best friend-type marriage unless you are safe with each other. Trying to change your mate and telling them, in essence, they’re not good enough for you, that you’re not gonna be happy unless they change is the most unsafe thing you can do.

“That’s the reason it’s so damaging,” he said. “Because you tend to want to as a human disconnect from people because they’re not safe.”

It’s a lie, he said, to think you can change your spouse.

“[If] you think that you can change them and you believe that if you change them, you’ll be happier, that’s the lie. … All the research shows it never works with anybody. I tried changing my wife and she tried changing me … and I gave up. … So after 38 years of marriage I began the wonderful adventure of working on just me.”

That’s where Smalley’s latest book, “Change Your Heart, Change Your Life,” comes in.

Hugging a pink heart-shaped pillow to his chest, Smalley told students that our lives and our relationships all rest on the beliefs we hold in our hearts.

For Smalley, he’s learned how crucial it is to “memorize and meditate” daily — what he calls “the M&Ms.”

“I looked at my own life, made a list of things that don’t seem to reflect Christ, went to Scripture and memorized a few. I branded them on my heart; I tattooed them in my heart. … It is transforming me because it’s alive.” Smalley, who signed books and talked with students after convocation, said his recent book is applicable to college students.

“They are alive and free to think and they are discovering,” he said. “They’re developing their beliefs right now and they can change them anytime they want. If a 67-year-old can change his, an 18, 19, 25-year-old can do it.”