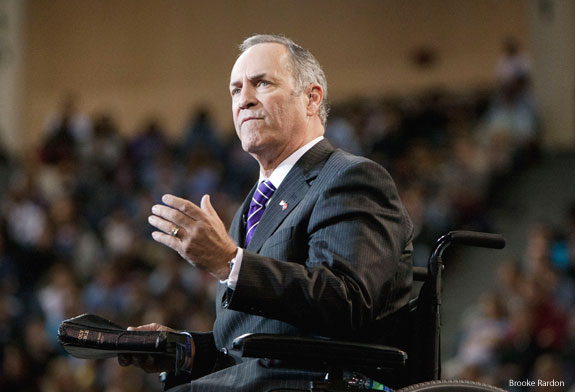 Evangelist Tim Lee challenged students in Monday’s convocation to have a “deep commitment” to the Lord and to be motivated in their walk with him.

“If you become the person of deep commitment in your Christian life that God wants you to become, the world will not understand,” Lee said. 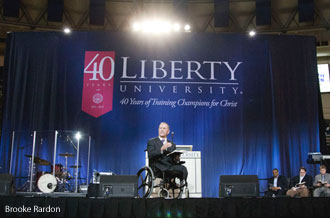 Lee is a member of Liberty University’s Board of Trustees and was a friend of founder Dr. Jerry Falwell, Sr. He is a frequent speaker at Liberty’s convocations.

On Monday Lee used the story of Shadrach, Meshach and Abednego in Daniel 3 to encourage students to stand up for their faith in adversity. He said people who live deeply committed lives to God will find themselves alone and other people will be angry with them and question their faith.

“The majority is not always right. There are times when God’s people have to draw a line in the sand and say it doesn’t matter what you say, what matters is what God says,” he said.

Lee told parts of his life story and how he learned the lessons of commitment. He joined the Marines in 1969 and was injured in the Vietnam War in 1971 when he stepped on a land mine and lost both his legs. His passion for the gospel and his country has taken him all over the world.