Liberty University’s Life March garnered hundreds of students Friday afternoon to represent more than 60 million babies killed since the signing of Roe v. Wade and to create awareness of one of the greatest injustices of modern culture.

Friday’s march followed a virtual Convocation that featured warriors in the battle for life: Allie Beth Stuckey, host of the Relatable podcast and the Convocation keynote speaker; conservative activists David and Jason Benham; Be Their Village founder Christine Yeargin; and Susan Campbell, executive director of the Blue Ridge Pregnancy Center in Lynchburg.

The march, sponsored in part by the Culture of Life 1972 (COL1972) and the Students for Life club, began marching at the Freedom Tower and finished on the Academic Lawn. Outside the Montview Student Union, Liberty President Dr. Jerry Prevo gave a short speech before the march, emphasizing what it means to be pro-life.

“We gather here today so that here in America and around the world the hearts of people will be changed so we can overturn Roe v. Wade,” Prevo said to the students assembled before the march. “Today, abortion is the greatest injustice going on in the world. And we’re here today to stand up for those unborn who deserve, like you and me, a right to be born, to live, and to follow God’s purpose for their lives.” 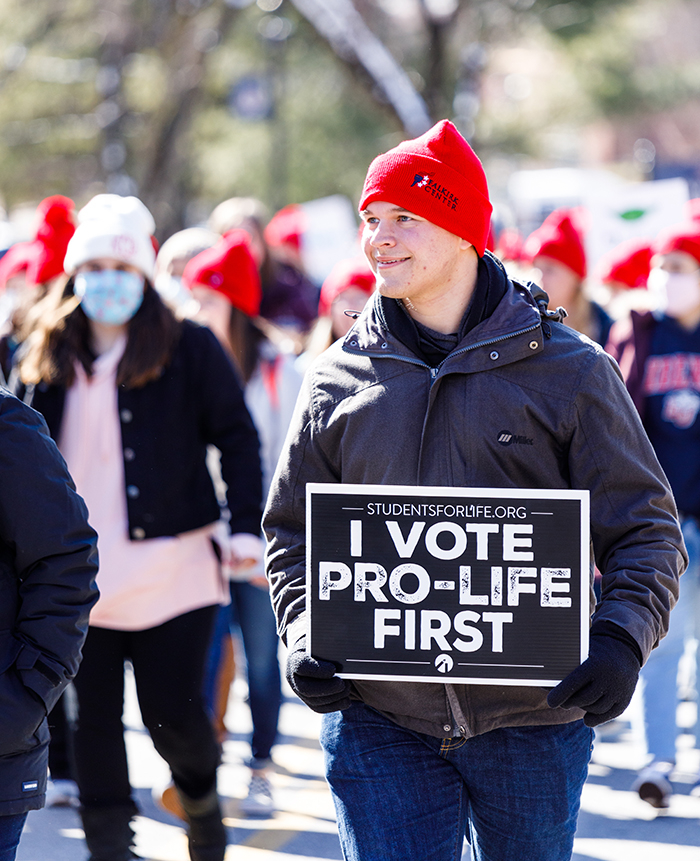 COL1972 donated 600 beanie hats for students to wear while they walked around the grounds of Liberty’s campus. Live worship music played before and after the noon march.

“The Liberty University Life March was one of my favorite experiences thus far being a Liberty student,” said junior Victoria D’Adessi, co-founder of COL1972. “I think it’s so important that we as Liberty University take a stand for the unborn.”

“The pro-life movement really embodies (Liberty founder) Jerry Falwell Sr.’s mission of being a Champion for Christ,” she added. “We can’t be Champions for Christ without being champions for the unborn.”