Candace Owens and husband discuss Brexit, Blexit, and the conservative cause

Brexit party leader and European Parliament member Nigel Farage was originally scheduled to speak but could not attend because of the Brexit battle waging in the United Kingdom.

Although unavailable in person, Farage apologized for his absence via a prerecorded video message. He said he would gladly visit Liberty on another date after the “democratic and constitutional crisis” in the UK had resolved.

“Brexit matters for everyone,” Farage said in his video. “It matters because Brexit is the epicenter of the battle between the globalists and those who want the nation state … I dare not desert the men and women that are fighting with me. But I will, please, look forward to a fresh date to come to Liberty.” 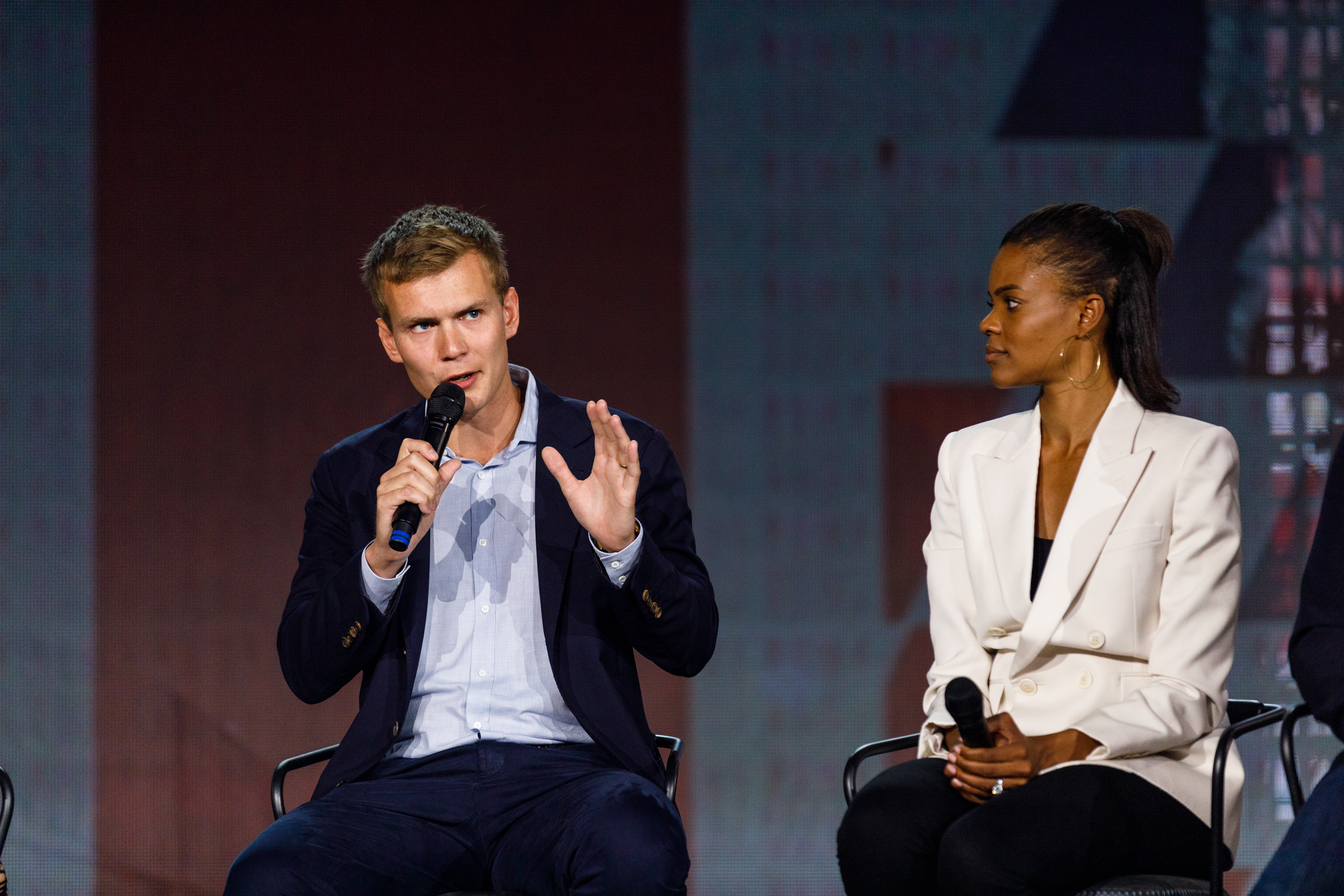 “For the last 100 years, Britain and America have been fighting side by side against tyranny,” George Farmer said, from World War I through the more recent rise of radical Islam. “In many ways, Trump and Brexit represent the latest fight against tyranny … (Brexit) is all about restoring choices and sovereignty to the individuals of the United Kingdom versus the European Union.”

He called the European Union “so undemocratic” that if it were its own country, it wouldn’t be allowed into the union.

President Jerry Falwell said when Britain voted for Brexit, it created a wave.

The Brexit discussion transitioned to “Blexit,” a movement started by Candace Farmer to lead a “black exit” from the Democratic party.

Candace Farmer, who will release her new book, “BLACKOUT: How Black America Can Make Its Second Escape From The Democrat Plantation,” in February, described Blexit as an effort to educate black Americans of the manipulative, victimhood narrative that progressives use to lure black citizens to the voting booths and that the media is perpetuating daily. 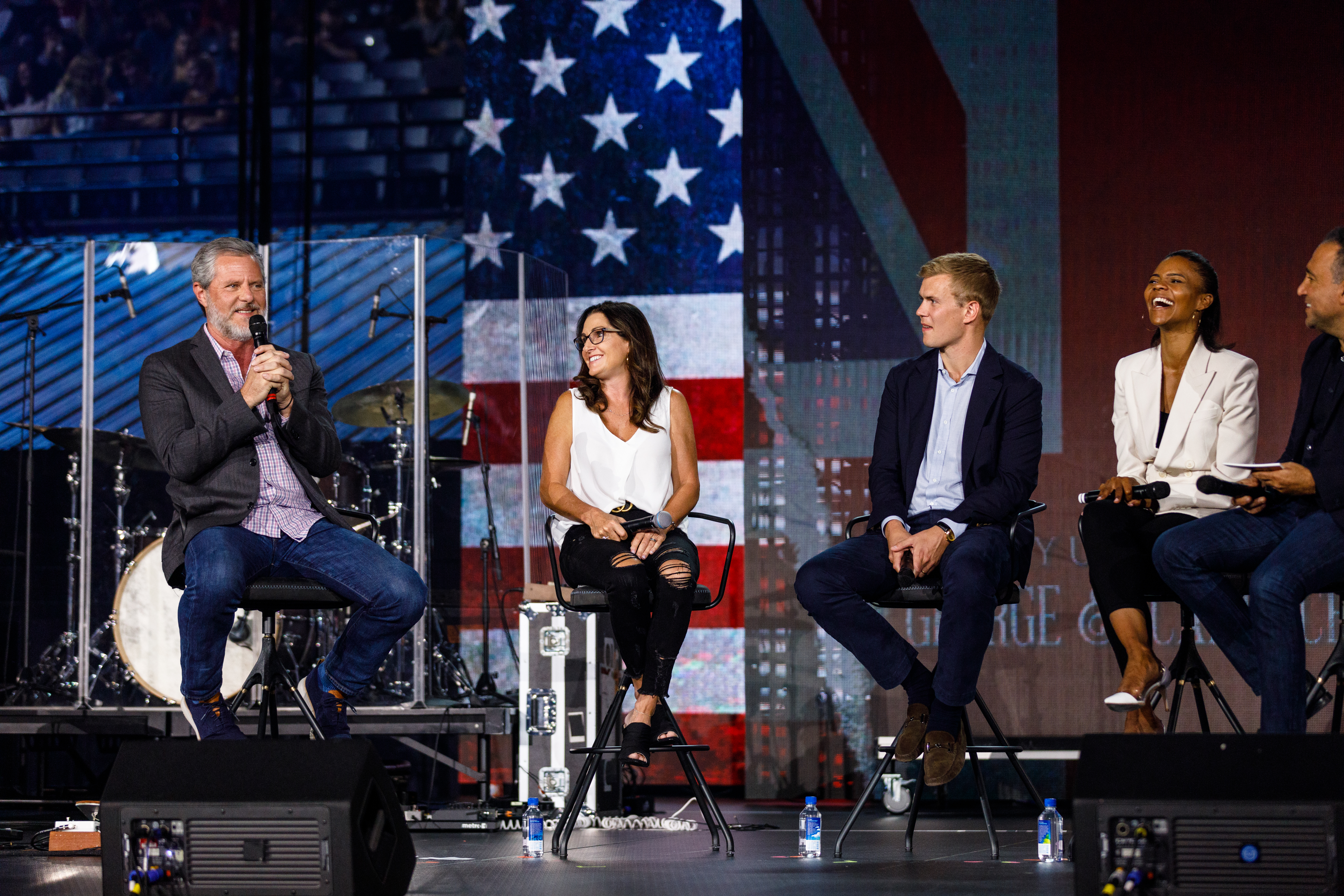 She later humorlessly toyed with the possibility of running for president in 2024 (when she will be old enough), which was met by loud applause.

The couple, who tied the knot on Aug. 31, encouraged the students to view marriage as a Biblical, selfless institution to address problems as one entity.

“Marriage is a partnership,” George Farmer said. “The strongest example for marriage the world has ever seen is Christ loving the church. … One of the real problems in our society, particularly in marriage, is selfishness.”

According to Candace Farmer, that problem stems from modern feminism, which seeks to eradicate masculinity and break down the family unit.

“This feminism that’s sold to us when we’re young, and when you get older, if you don’t break free of that, you’ll wake up one day and realize it’s a scam,” she said. “I was one of those people who fell for this scam. (Now) I stand up proudly on this stage and say I’m not a feminist. I’m happy to be married. I love my husband. I can’t wait to have kids, and I think that’s a blessing.”

Convocation concluded with The Newlywed Shoe Game, a contest to see how well the young couple knew each other.

Although Candace Farmer has visited the Convocation stage before (she spoke to students in September 2018), this was George Farmer’s first visit.

“Forget the Ivy Leagues, forget Oxford, forget Cambridge,” he said. “This (at Liberty University) is where it’s happening.”