A team of Liberty University School of Law Moot Court competitors is headed to the National Finals of the American Bar Association (ABA) National Appellate Advocacy Competition (NAAC) after being declared regional champions in Brooklyn, N.Y., in February. 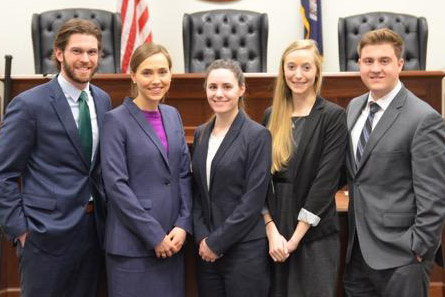 The team of Brenna Compitello and John Riordan, one of two Liberty pairs, swept through five rounds of competition, defeating teams from Loyola Law School, the University of Kansas, Campbell University (twice), and the University of Houston. They advance to nationals in Washington, D.C., April 5-7.

“Being part of this team has helped me learn and grow in ways I never would have on my own,” Compitello said. “I definitely could not have done it without my teammates and coaches. I am so thankful to have the opportunity to work with them all, and I am excited to go to nationals with them.”

Liberty won the top three oralist awards at the regional competition, with Compitello taking third, Riordan finishing second, and Natalie Rhoads (who paired up with Levi Mauldin) winning Best Oralist. Liberty Law student Johnna Chick joined Compitello and Riordan in the brief-writing portion, which earned second-best brief. Mauldin and Rhoads advanced to the Round of 16 after winning rounds against Washington & Lee University and Duquesne University.

“I am thrilled not only with the results in the competition that reflected excellent advocacy skills, but also with the students who reflected humility, kindness, and grace in their interactions with other competitors and coaches,” said Liberty Law Professor Rena Lindevaldsen, who coached the team along with Meagan White (’17). “They represented Liberty and its values well among the 30 other teams that competed.”

The NAAC is a moot court competition emphasizing the development of oral advocacy skills through a realistic, hypothetical appeal to the United States Supreme Court. The competition involves writing a brief as either a respondent or a petitioner and then arguing the case in front of a mock court, made up of a panel of judges. Schools are allowed to register two teams for competition.

This year’s topic is related to the Americans with Disabilities Act and whether police should modify arrest or station interview procedures for those with known disabilities.

“One of the reasons I decided to come to law school was to learn how to effectively advocate for those who can’t do so themselves,” Riordan said. “Even though moot court cases don’t have any real-world consequences, it is still great to know that I have started to develop the toolset I need to help others.”

He added that it was “exciting to see how far I had come” from his first competition to Brooklyn. “To see the result of the work I’ve put in over the last few years was extremely rewarding.”

“I’m a big believer in school spirit,” Riordan added, “so the chance to represent the school and get our name out there was really great.”

Since Liberty sent its first team to the ABA Regionals in 2007, nine Liberty teams have been declared regional champions and advanced to the national round. Liberty has amassed five regional Best Oralist awards overall.