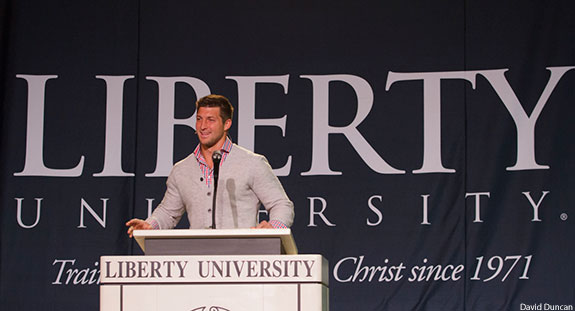 Heisman Trophy winner and NFL quarterback Tim Tebow stepped on stage at the Liberty University Vines Center Friday to an enthusiastic Convocation crowd of more than 10,000 welcoming him to the world’s largest Christian university for the first time. Tebow shed his football pads and helmet to share his heart with the student body, challenging them to make an impact.

“There are a lot of people who are going to tell you that you can’t, that you shouldn’t, that you couldn’t,” Tebow said. “Most of the time those are the people that didn’t, that couldn’t, that wouldn’t … But you can, because we serve a big God and your goals should be as big as the God we serve.”

Chancellor Jerry Falwell, Jr. introduced Tebow, praising him for his character and his commitment to his faith.

“In an industry where many are celebrated only for their performance on the field, Tim Tebow is an example of how much can be accomplished by living your values and making a positive difference in the lives of others,” Falwell said. “Tim is a fierce competitor with a strong work ethic. Tim is a leader that his teammates trust and respect. Even more than his impressive athletic skills is his integrity and character that have won him a league of fans. Tim lives a life that consistently reflects his values — he is dedicated to helping people in communities in need.”

Tebow is the current backup quarterback for the New York Jets. He is an outspoken Christian and often quotes Bible verses in media interviews. As a devout Christ-follower, Tebow is committed to bringing faith, hope, and love to those in need through his charity, the Tim Tebow Foundation. The foundation, among other functions, participates in wish-granting for terminally ill children, creates playrooms in children’s hospitals throughout the world, and is helping fund the construction of a children’s research hospital in the Philippines.

Tebow is well-known in the world of sports for his leadership qualities, determination, and knack for pulling together miraculous comeback victories. In his outstanding four-year collegiate football career at the University of Florida, Tebow led the Gators to two national titles and was the first sophomore to win the prestigious Heisman Trophy — the highest individual honor in college football. He was a first-round NFL draft pick in 2010, and in 2011 was granted the starting quarterback job for the Denver Broncos mid-season. He pulled the Broncos up from a 1-4 start to a division title and a thrilling overtime win over Pittsburgh in the wild card round.

Tebow’s success on the athletic field and his unwavering commitment to his faith has made him a source of inspiration to people all over the world, including many Liberty students. Because of this, he was easily one of the most highly anticipated Convocation speakers to date. Students lined up outside the Vines Center as early as 4 a.m. to get the best seats.

“God has given Tim a platform unlike many Christians will ever have — he loves Christ, he’s a great athlete and he has been an excellent example of what it means to be a Christian, especially in a world that misunderstands what it really means to love Christ,” said Clayton King, a campus pastor at Liberty who said he first met him when Tebow was a student at Florida. “For him to come here gives him a platform among evangelicals who also love Jesus — to encourage us to know that whatever God calls us to do and whatever gifts God gives you, you can use them for His glory. Plus it doesn’t hurt that he is one of the most famous athletes in the world, what a treat for us to have him.”

Sophomore Jaclyn Wallace said she was excited to have the opportunity to see Tebow in person. 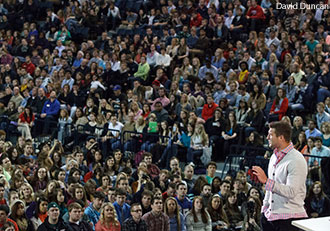 Tebow shared several personal stories and relived highlight moments from his football career, all the while pointing to humility, love, and service as the most important qualities in life. He had three main pieces of advice: “have passion; don’t be normal … be an example; and be great.”

Being passionate is a trait Tebow said he learned from his father, and found inspiration through Mel Gibson’s portrayal of William Wallace in the film “Braveheart.” But passion is not the same as hype, excitement, or motivation, Tebow warned. If things don’t go well, “that motivation is gone.”

Tebow called students to resist to peer pressure and strive to be an example. It is not always easy, he said, but God uses those who are willing to “go the extra mile” to be an encouragement to others.

He said though many people look up to him because of his ability on the football field, the true role models are the missionaries and humanitarians who risk their lives every day to share the Gospel and serve others.

After his message Tebow responded to questions submitted by Liberty staff and students, taking the opportunity to share some of the values he strives for in being a man of God.

Tebow will return to the Vines Center stage tonight as he gives the keynote address for the opening night of Wildfire Men’s Impact Weekend, a two-day men’s conference designed to encourage men in their faith and train them to live the adventurous life
God intended for men.