How God Brought Me to Hydaway 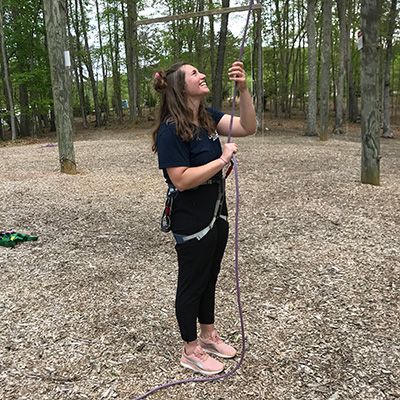 Four and a half years ago, I was faced with the decision about where I was going to go to school. I visited Liberty during a CFAW weekend, prayed about my decision of which school to choose, and just so happened to stumble upon the Hydaway website around that time. I was immediately sold on going to LU after seeing pictures of the facility and looking at the various activities they offered for students. The main regret I have is not trying to work at Hydaway sooner. I spent my first year at Liberty working in a work-study job at one of the call centers. While I loved the people, the office life just wasn’t for me. I remember applying for a work-study position for Hydaway while in between phone calls at the call center.

Applying to Work at Hydaway

Three years ago, in May 2019, I sent in my application to work at Hydaway. However, my hopes were soon shot down when I received an email saying that all positions had been filled for the upcoming school year. I remember feeling so discouraged, yet hopeful at the same time. I knew God had a plan and would lead me to the job He wanted me to be in. By the beginning of August, I received an email saying that Hydaway was again hiring and that they would like to do a phone interview with me. I knew I couldn’t make it to all of orientation, so I immediately assumed that I wouldn’t be offered the job. Within the next week, I was offered a position. I remember showing up to orientation late due to HR paperwork issues, which made me even more timid and anxious to walk into a room full of people I didn’t know. Reflecting on that moment makes me kind of laugh because I had no clue that I was walking into a room of people who would become some of my closest friends.

God’s Timing is the Best Timing

When I was originally hired, I thought I would be there for 2 semesters, but then COVID-19 hit and my internship got pushed to the fall semester of the next year. Once again, I felt a mix of discouragement and hope because my plans weren’t going the way I wanted them to go, but I also knew God was leading me. Being at Hydaway that extra semester led to me getting a manager position by the end of the semester and going on to pursue a master’s degree.

After two times of preparing to leave Hydaway, the third time is the charm. I say that extremely sarcastically. The truth is, I’m incredibly sad to be leaving a place that has allowed me to grow, a place where I am given freedom to do trail maintenance, build projects, plant trees and plants, and facilitate challenge course sessions. A place where I’ve laughed so hard, I’ve cried. A place where I’ve met some of the most amazing people in the world who I have the privilege of calling not just my coworkers, but my friends.

Once again, I have days where I feel discouraged, but the hope within me is louder because I know that God can and will do amazing things. His ways and plans for us are higher and better than the plans we have for ourselves (Isaiah 56:8-9). Looking back on how God has blessed me gives me hope for all of the “nexts” in my life, and I hope it can bring hope to you as well!