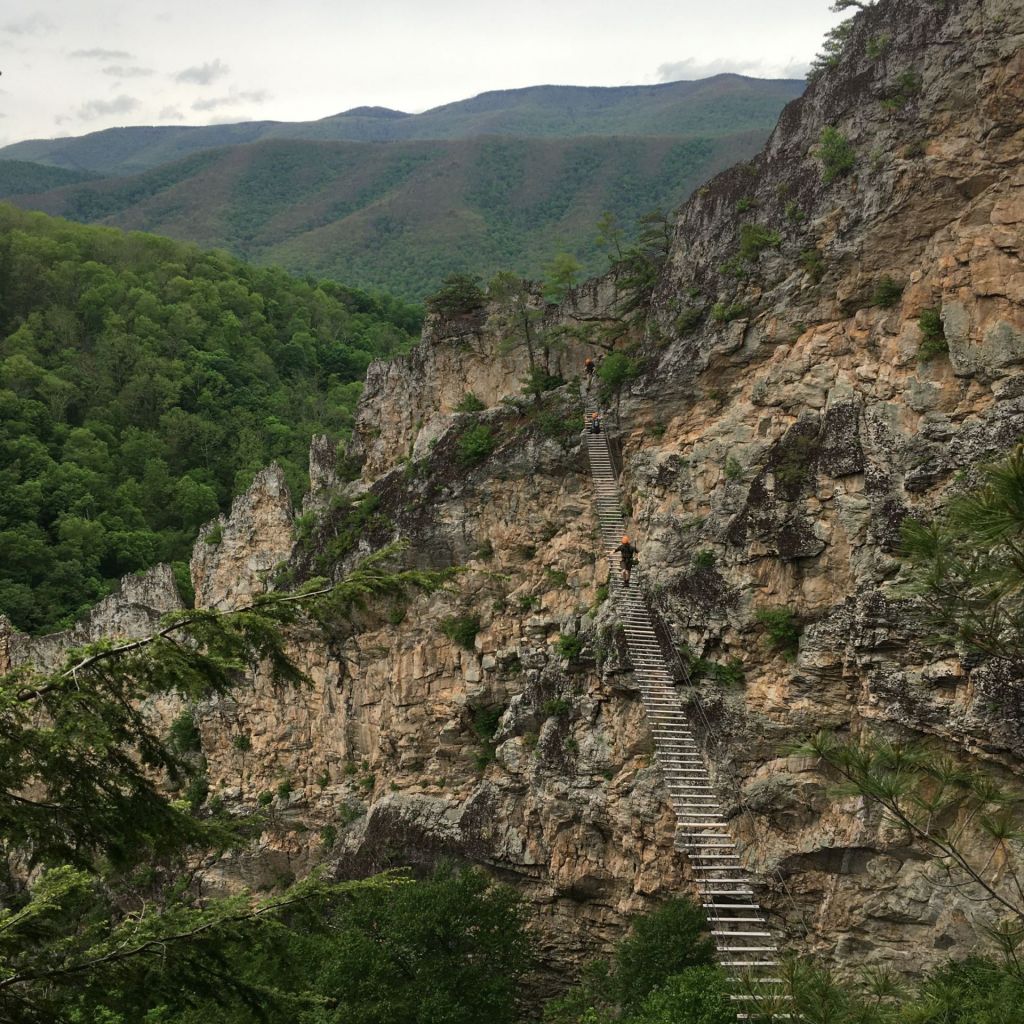 This summer we visited NROCKS Outdoor Adventures in West Virginia to tackle the Via Ferrata. Privately owned by NROCKS, the Via Ferrata at Nelson Rocks is a climbing and traversing adventure using steel rungs and cables to move up the rock face rather than climbing on the rock itself. The term “via ferrata” is an Italian word simply meaning “iron path.” Via Ferratas trace their heritage back to WWI when soldiers constructed them to quickly move across the Italian Alps.

Today they are a popular recreational pastime for the thrill-seeking adventurer. While the climbing does not require a specialized skill for climbing technique, choosing appropriate routes, or placing hardware, it does demand a certain level of physical and mental equilibrium, a skill essential to any climber and outdoor enthusiast.

Upon arrival at the NROCKS lodge, we met our guide who framed the day for us and provided us with a thorough safety briefing. Next we harnessed up and grabbed our double set of carabiners and made our way to the cliff face. After a short, yet steep hike, we came to the base of Nelson Rocks where we discovered the conspicuous steel rungs and cables spiraling up the cliff face and out of sight.

The first section introduced us to the technique and rhythm of the Via Ferrata without overwhelming us with too much elevation or exposure. After 15-20 minutes of climbing, we came to the edge of the first rock formation. A quick peak around corner revealed the massive valley below us and the rest of Nelson Rocks; the first taste of what was to come! At this juncture, we had the option of turning back as NROCKS strategically placed an exit point along the route. After taking a moment to take in our surroundings and truly put our trust in our harness and connection points, we continued along the opposite side of the wall we had just climbed, except this time several hundred feet in the air and surrounded by open valley below.

We continued traversing on the wall for 30 minutes or so, taking time to take pictures and appreciate the view. Shortly we came to the end of the second section and made it to the 200 foot long bridge stretching to the second cliff towering above us. This was the second and last exit point for the rest of the tour and a good opportunity to check our mental and physical preparedness for the next leg of the climb.

Crossing the bridge was really something out of a movie and certainly one of the most exciting parts of the day! The swinging bridge was supported by incredibly strong steel cables that allowed us to clip in and slide all the way across without having to clip into multiple sections as before. Crossing the bridge can be done at your own pace and is a great opportunity to take pictures and trust your footing. Once we reached the second wall, we were committed to finish the last half of the climb.

After 20-30 minutes of climbing we reached the edge of the second rock face where we would leave the valley and begin traversing the opposite side of the wall. At this point, we were still relatively exposed but no longer had the second cliff as a reference point; all we knew was that we were going up! After another 30 minutes or so, we came to the final leg of the climb, an optional 100 foot climb to the summit of Nelson Rocks. By this point, it seemed like a reasonable challenge and an experience not worth passing up. After a short climb we came to the very top of the Nelson Rocks fin which was no than 4-5 feet wide and hundreds of feet from the valley floor where we began that morning. The first thing we noticed was just how far down the bridge was from us. We had climbed so far and high since then! This was by far the most spectacular part of the day and the best place to pause and soak it all in. After 20 minutes or so of enjoying the view, we down climbed the 100 foot wall and then made our way to the forested slope nearby to finish the climb. We had conquered the Via Ferrata!

Expect to see this trip in early September on our calendar. We hope you will join us for the trip of lifetime!