Opening its doors to its first class of student-doctors in 2014, the Liberty University College of Osteopathic Medicine (LUCOM) is the second osteopathic college in the Commonwealth of Virginia and the thirtieth in the U.S.

Taught by dedicated professionals, LUCOM has designed a world-class, student-centered curriculum that is distinctively Christian. LUCOM provides state-of-the-art facilities to ensure that our osteopathic medical students receive a highly advanced medical education in a positive learning environment. Clinical rotation opportunities are provided for our student-doctors at core sites primarily in Southern and Southwest Virginia.

Our college of osteopathic medicine is located in one of the traditional textile and tobacco areas of the state. Here, we are training community-based physicians with a mission to provide quality medical access for underserved patients. This is made possible by a joint effort and financial grant from the Virginia Tobacco Commission.

Our graduates receive the foundation of knowledge, skills, and competencies that will enable them to meet the diverse needs of their future patients. Our college is devoted to producing osteopathic physicians who are professional and ethical.

Committed to the osteopathic philosophy and serving the needs of our student-doctors, faculty, and patients, LUCOM’s goal is to advance both the science and practice of osteopathic medicine. 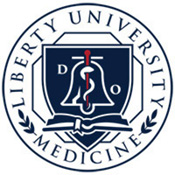 Liberty University Medicine is clearly stated around the circumference of the academic seal, and each component within it was carefully chosen to incorporate not only the history and character of the university but also the osteopathic profession.

In the center of the seal is the DO symbol called the Staff of Asclepius. It consists of a single serpent encircling a staff, named after a skilled physician who practiced in Greece around 1200 B.C. The term can also be found in Homer’s Iliad. Asclepius is commonly referred to as the Greek god of healing.

The staff is placed upon the Liberty Bell, a replica of which will reside at the top of Liberty’s newest structure, the Freedom Tower. The bell symbolizes the university’s dedication to the founding principles of the United States.

Both the rod and the bell rest atop of a shield – the shield of faith, taken up by students as they go out into the world to impact the culture for Christ.

The foundation of the seal – and the heart of Liberty University – is the Bible, revealing the truths of God and the principles by which we live. Always open, the Word of God speaks to everyone who listens.

Behind the shield is the octagon, reflecting the classic Jeffersonian architecture of Liberty’s first building and many of the new buildings throughout the reconstruction of campus.

At the base of the seal are laurels, the symbol awarded to victors in ancient Greece. The laurels represent the mission of Liberty University, Training Champions for Christ, which has been the priority since 1971.

Blue, red, and white are the official colors of Liberty University.