Deciphering the Letters and Numbers on Ammo Boxes 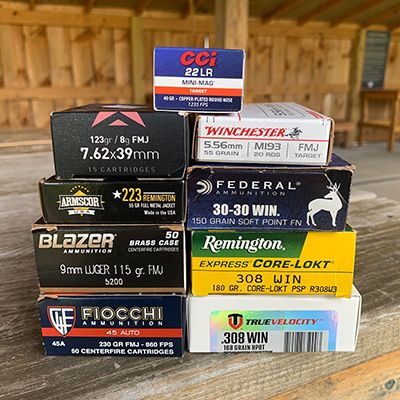 So, you’re looking for some ammo. Walking into a gun store and seeing shelves with all manner of number and letter combinations can be quite intimidating. We’re going to try to take some of the guess work out of it so you can make a decision with confidence.

Generally, the number/word combination with the biggest font will be the caliber. That’s the most important bit of information for which you’re looking. The number denotes the caliber. If you’re not sure which you need, this information should be marked on the barrel and/or slide of the gun. The number is important, but the word after it can be as well. For instance, there is significant difference between .357 Mag and .357 Sig. Most of the time, there is just the one number for caliber. However, sometimes there is another number, such as 7.62×39, 5.56×45, or 9×19. The first number is still the caliber, but the second number denotes the length of the cartridge.

Oftentimes, you’ll see a two- or three-digit number followed by the letters ‘gr.’ This stands for ‘grain’ and denotes the weight of the projectile. Caliber plays into this equation significantly.

Sometimes, you’ll find a group of numbers, a chart, or some smaller numbers followed by ‘fps’. This stands for ‘feet per second’. This is how fast the projectile is moving when it leaves the barrel.

Here is a chart of common bullet types, their abbreviations, and their recommended use.

Hopefully, this has shed some light on what can be a frustrating or intimidating endeavor. This post addresses rifle and pistol ammuntion. Shotgun ammunition is a whole other ball of wax. We’ll cover that in a later post. If you have more questions, please come up to Liberty Mountain Gun Club during our open hours and speak to our knowledgeable staff. They’ll be more than happy to help how they can.