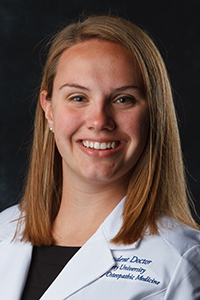 For the second time this past year, a student-doctor from Liberty University College of Osteopathic Medicine (LUCOM) has been elected to a national committee. Janae Fry, Class of 2019, was elected and appointed to the national position of Academic Member of the Osteopathic Political Action Committee (OPAC), supported by the American Osteopathic Information Association (AOIA), this past July.

Established in 1979, OPAC was formed to be the osteopathic voice throughout the federal level. Its members engage osteopathic physicians to elect and re-elect pro-physician candidates to Congress through contributions, education and political activism.

This past June, Fry submitted an application to the OPAC Board and at the American Osteopathic Association House of Delegates board meeting. In July, the board discussed the applications and voted. She was appointed Academic Member of OPAC and is the only student-doctor in the country selected to that position. “I am extremely honored and humbled to be selected for this position because this is a wonderful opportunity to represent and advocate for the osteopathic profession, our physicians, and our patients,” said Fry. “The challenge here is similar to what all medical students face and it is that I must balance my priorities and accomplish a number of important objectives all at the same time.”

Fry, a third-year student-doctor from Burr Ridge, Illinois, was drawn to the opportunity to combine science and serve others, which led her to choose the medical profession. She chose to attend LUCOM after her interview day experience with several faculty members. “I felt like I was part of a family,” Fry added. “The faculty demonstrated their interest in us as individuals by showing they had read our essays and they participated in discussions with us on a personal level and I did not have the same type of interactions at the other schools where I interviewed.”

Fry also adds that she has found satisfaction in challenging herself to learn and in helping others. “I believe I can develop these skills further as a doctor and assist patients and their families, but most importantly, becoming a physician allows me to use the skills God has given me to serve others.”

Throughout the past two years Fry has played an active role in LUCOM’s Student Osteopathic Medical Association (SOMA) chapter, participated in DO Day on the Hill, and is a member of the  Omega Beta Iota (National Osteopathic Political Honor Society). In addition, she also sends emails on a regular basis to her congressmen advocating for issues that affect Osteopathic physicians and their patients.