While serving in the Philippines during WWII, George Rogers was taken prisoner by the Japanese along with thousands of American and Philippine troops. They were forced to march about 75 miles in five days, known as the Bataan Death March, and were sent to POW camps where many died of starvation and abuse. Mr. Rogers withered away to a mere 85 pounds while being held as a POW. He was one of the very few survivors.

In 2012, Rogers finally received recognition for his service by being awarded the Purple Heart and Prisoner of War Medal. Mr. Rogers, who first started as a CEO for the “Old Gospel Time Hour” in April 1974, eventually retired in 1999 from Liberty where he last served as vice president of finance and administration. To honor this man and his tremendous sacrifices for our nation, Liberty University has named the George Rogers Champion of Freedom award in Rogers’ honor.

Beginning in 2010, the George Rogers Champion of Freedom Award is given annually to a man or woman who served in the United States Armed Forces and went above the call of duty, displaying extraordinary heroism while in the service and continuing to serve as an outstanding ambassador in their community. Nominations are collected from the Liberty community and the selection is made for the most worthy veteran to receive this prestigious award. The award is presented at a Flames football game during Liberty’s Military Emphasis Week, held near Veterans Day.

Dennis Janiak is a decorated Marine Corps combat veteran who served in Vietnam from 1967–1968. During his time in service, he earned many awards and commendations including:

Since separating from the military, Dennis has served as a Post Chapter Commander and Senior Vice Commander of Chapter 1607 of the Military order of the Purple Heart, and has been a member of the Marine Corps League, as well as the American Legion at Post 16, and Vietnam Veterans Chapter 196. He is active in the business community of Central Virginia having served on the boards of the Centra Health Foundation, CVCC Educational Foundation, Central Virginia Industries, Region 2000 and Sweet Briar College to name a few. Both Governors Allen and Warner appointed him to their Workforce Advisory Councils. Currently he serves as Chairman of the Board of the Virginia Technical Institute located in Altavista VA and Vice Chairman of the Altavista Economic Development Authority. He is an active member of his church serving as treasurer and travels on yearly mission trips to help build homes or make homes handicap friendly for people in rural West Virginia coal country and Puerto Rico. In his free time, he enjoys working on his farm, volunteering at the Lynchburg Daily Bread or at a Habitat for Humanity build and spending time with his seven grandchildren.

One day, in April of 2008, Moore and his comrades were receiving rocket fire outside their bunker. Holding true to his policy of always being the last man to enter the bunker during attacks, Moore was not able to take cover in time before an explosion hit. “There was an explosion behind me which launched me forward and I hit a part of the concrete bunker,” he said. “I dislocated my hip and had a lot of blunt trauma. I had nerve damage, and at the time I couldn’t move my legs and only could move one arm. My ears were bleeding from the concussion, and I was in and out of consciousness.” While still under fire, Moore’s men carried their leader to a truck outside the bunker and rushed him to the hospital on base.

After receiving treatment, Moore returned to the U.S., having been informed that some of his injuries were permanent. Medically discharged in 2010 due to his back and hip injuries, Moore and his family moved to Bedford county, closer to Liberty University, where their oldest son, Brandon, worked. Moore now maintains his sheep and goat farm and is a member of local veterans’ groups such as the Military Order of the Purple Heart, American Legion, Veterans of Foreign Wars, and the Lynchburg Area Veterans Council. Moore is an ordained minister with the Southern Baptist Convention, a keynote speaker, and an interim preacher. He recently authored a memoir of his tours of duty, titled “Purple Hearts and Wounded Spirits: One Man’s Journey through War, Faith, and Forgiveness.” Which was published by Liberty University Press. Read more. 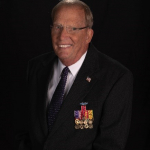 On March 8, 1969 while serving on Fire Base LZ Grant in Tay Ninh Province, Vietnam, the base came under heavy enemy attack. Sgt Krantz’s Tactical Operations Center took a direct hit from an enemy 122 MM rocket. Even though injured in the attack, he continued his duties of handling all of the communication for the battalion while under direct enemy fire. He was awarded a Bronze Star with “V” Device for Valor as well as a Purple Heart for his actions that day. Today, Mr. Krantz serves as a board member for The Bedford Boys Tribute Center in Bedford, Virginia. The center is a memorial and recognition center for the Bedford Boys killed on Omaha Beach on D Day. He also serves as Senior Vice Commander for the Military Order of the Purple Heart, Chapter 1607. Read more.

Jesse Macdonald, a residential student and former president of Liberty University’s Student Veterans Association, was awarded the George Rogers Champion of Freedom Award at the military appreciation football game on Nov. 30, 2019. Prior to coming to Liberty University, Macdonald joined the U.S. Army in 2005 and served in the 82nd Airborne Division overseas in Iraq. He is not only the youngest person to receive the award, but he is also the first current Liberty student to be awarded the honor. The Liberty Champion recently interviewed Jesse and shared some of his story in transitioning from military combat back to civilian life. Read more.

Drafted into the U.S. Army in 1969 at 19 years old, Otto Davis served in Vietnam with the 1st platoon of the 5th battalion mechanized infantry and eventually became the operator of armored personnel carriers. He received a Purple Heart during his time of service and continues serving today in his local community. He is the co-founder and a past president of the Lynchburg Area Veterans Council, which exists to provide services and resources to veterans in the City of Lynchburg and its surrounding counties. They arrange and provide free transportation to medical appointments for wheelchair-bound veterans, and coordinate financial assistance for veterans in need. Read more.

Corporal Gary Witt of the United States Marine Corps is the eighth recipient of the George Rogers Champion of Freedom award. During Witt’s 14-month deployment in the Vietnam War as a Marine, Witt earned two Purple Hearts. He has also received the National Defense Medal, the Vietnam Service Medal, the Combat Action Ribbon, the Good Conduct Medal, and the Presidential Unit Medal. Witt has continued his service in the local community, successfully leading the effort to designate Lynchburg and its surrounding counties as a Purple Heart Community and to designate Liberty University as the first Purple Heart University in Virginia. He also serves as a chapter commander of the Military Order of the Purple Heart (MOPH) and the Sergeant-at-Arms for State Department of Virginia MOPH. Read more on Liberty News.

Major Michael Donahue is a respected Liberty alumnus and was an assistant professor of military science for Liberty’s Army ROTC program from August 2008 to July 2010, during which time he completed his master’s degree in education and his Ed.D. Donahue served three combat tours of duty in the U.S. Army in which he was stationed in South Korea, Iraq, and Afghanistan. On Sept. 16, 2014, in Kabul Afghanistan, Donahue’s life was taken when a Taliban suicide bomber drove a vehicle laced with explosives into a foreign military convoy on the base. Donahue’s awards and decorations include the Bronze Star Medal with two oak leaf clusters, the Purple Heart, the Defense Meritorious Service Medal, the Meritorious Service Medal with three oak leaf clusters, the Afghanistan Campaign Medal with two campaign stars, the Iraq Campaign Medal with one campaign start, the Korean Defense Service Medal, the Combat Action Badge and the Senior Parachutist Badge. Read more on Liberty Flames.

A native of San Antonio, Texas, Oliver North is a twenty-two (22) year Marine corps veteran who served in Vietnam. The 1968 Naval Academy graduate was awarded the Silver Star, Bronze Star, and two Purple Hearts during his military service. As a member of Ronald Regan’s National Security Council staff from 1983 to 1986, North helped plan the rescue of eight hundred and four (804) medical students in Grenada, the daring capture of the Achille Lauro hijackers and an attack on terrorist bases in Libya. Following his military and public service careers, North became an author with thirteen (13) titles, all of which have made the New York Times Best Seller list. He is also the host of “War Stories” and has been embedded with more than fifty-five (55) U.S. and allied combat units as a reporter. Read more.

On March 3, 1968, during his 19th reconnaissance mission deep in hostile territory in Vietnam, Lieutenant Clebe McClary was critically wounded during an enemy attack. Despite his injuries, he continued to lead his men as they battled the enemy hand-to-hand before successfully withdrawing his unit from the area. His devastating injuries included the loss of his left arm and left eye and a prognosis that he would never walk again. He received three Purple Hearts and was presented the Silver Star and the Bronze Star for bravery by the President of the United States. After two years in military hospitals, 30 major surgeries and countless hours of physical therapy, he walked out to begin a new life as an inspirational speaker. He has impacted hundreds of thousands of people in all 50 states and 30 countries. Read more.

The military veteran chosen to receive the George Rogers Champion of Freedom Award for 2012 is Tim Lee, a Vietnam War veteran and evangelist.  Lee, who lost both of his legs in 1971 during the Vietnam War, views his disability not as a tragedy, but as an opportunity to share God’s love through his evangelical ministry. In March of 1971, he was apprehended by the hand of God along an abandoned grassy trail in Quang Nam Province, Vietnam. In that moment engulfed in smoke, fire and holy vengeance, a land mine explosion severed two lower limbs, and placed in a wheelchair for life a young man who was to carry, without legs, a message from God to a nation.  Read more.

The military veteran chosen to receive the George Rogers Champion of Freedom Award for 2011 is Steve Bozeman, a decorated veteran who continues to support his country and fellow servicemen and women. Bozeman enlisted in the United States Marine Corps in January 1966 and became an aircraft and helicopter mechanic. Bozeman was sent to Vietnam where he was stationed for two years, acting as both a helicopter mechanic and a machine door gunner. For his service and courageous acts, Bozeman was awarded a variety of medals, including two Purple Hearts for combat wounds. He was also decorated with 18 Air Medals, which distinguish those that have meritorious achievement while participating in aerial flight. Additionally, the Navy Commendation Medal was bestowed upon Bozeman, with the medal also holding a “V” for heroism and participation in combat operations.  Read more on Liberty Flames.

While serving in the Philippines during WWII, George Rogers was taken prisoner by the Japanese along with thousands of American and Philippine troops. They were forced to march about 75 miles in five days, known as the Bataan Death March, and were sent to POW camps where many died of starvation and abuse. Mr. Rogers withered away to a mere 85 pounds while being held as a POW.  In 2012, Rogers finally received recognition for his service by being awarded the Purple Heart and Prisoner of War Medal. Mr. Rogers, who first started as a CEO for the “Old Gospel Time Hour” in April 1974, eventually retired in 1999 from Liberty where he last served as vice president of finance and administration. Read more on Liberty News.