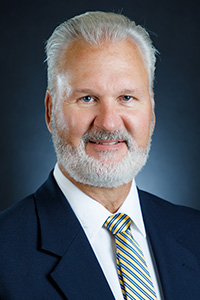 Dr. Wayne Kompelien is an award-winning artist as well as director and conductor. After receiving a degree in Music Education from Oral Roberts University, Dr. Kompelien went on to finish a Master’s and Doctorate in Vocal Performance from Kansas University. While there, he established himself as a notable voice teacher and conductor. During this time, he continued performing opera and oratorio in the Midwest.

Dr. Kompelien’s acclaim as a fine performer began in Kansas as he placed twice in the Metropolitan Opera Auditions in Kansas City. His portrayal of Olin Blitch in Carlyle Floyd’s Susannah reached national recognition as the production placed second in a national competition. He has been regularly featured in opera and oratorio productions. He has participated in many special recital performances for Opera Roanoke and Opera on the James.  Besides the opera and oratorio stage, Dr. Kompelien has been singing in churches and various other venues throughout his career, performing everything from gospel to jazz.

Dr. Kompelien is the founder of the opera program at Liberty University and has directed stage productions every year since 1987. He is also the director of the Chamber Singers, which he has led since 1988. The group is highly acclaimed as a collegiate choir and enjoys ministry through a spring tour each year. Dr. Kompelien has served as the Virginia president of the National Association of Teachers of Singing (NATS) and continues to be an active member. He has had numerous students win at the Virginia State and Mid Atlantic Regional levels of NATS. He has also served as a choir clinician and director for the Pennsylvania High School All-State Choir and continues to provide church choir clinics.