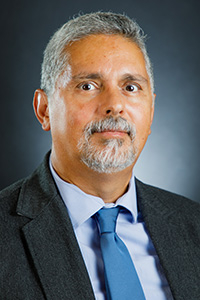 Associate Professor of Voice and Guitar

Dr. Leon Neto is a multi-instrumentalist Christian artist, educator, and researcher. He holds a Bachelor degree in Church Music from the Northern Baptist Brazilian Seminary, a B.M. in Music Education from Pernambuco Federal University (Brazil), a Master of Arts in Music (Vocal Performance and Musicology) from Campbellsville University, KY, and a Doctor of Musical Arts in Vocal Pedagogy from Shenandoah Conservatory of Shenandoah University, VA.

Dr. Neto has worked in numerous capacities in the music industry, including producer, musician, singer, and arranger for nearly one hundred albums. Professor Neto has traveled to all regions of Brazil experiencing its plethora of popular genres and indigenous rhythms. He is particularly interested in the music of northeast Brazil, where he lived for over twenty years. In the United States since 2003, Dr. Neto has been invited to give lectures in several institutions, such as Northwestern University in Illinois, the University of Louisville in Kentucky, and Houghton College in New York. He was the first researcher accepted for publication on topics related to contemporary Christian music in the Journal of Singing and the Journal of Voice, two of the most prestigious academic journals in voice science. Dr. Neto presents regularly at the Voice Foundation Symposium and travels overseas frequently for concerts, lectures, and missionary work.

Dr. Neto is an active member of the National Association of Teachers of Singing (NATS), The Voice Foundation, and The International Council of Ethnodoxologists. He has been awarded the Shenandoah Conservatory Fellowship and took first place in the São Luis Conservatory competition (voice) in 2002.

Dr. Leon Neto serves as an associate professor of voice and guitar. In addition, he directs the Latino praise band Libertad and the Worship Guitar Ensemble.