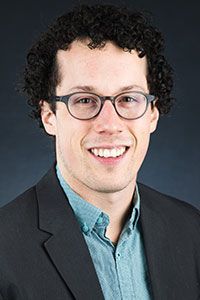 Professor David Feldman performs frequently as a soloist, orchestral, and chamber musician. He holds multiple cello performance degrees, studying under Alan Weinstein of the Kandinsky Trio at Roanoke College, and Brian Hodges at Boise State University, for whom he was a teaching assistant. He is an alumnus of the Castleman Quartet Program, Bowdoin International Music Festival, and the Chautauqua Institution, completing additional studies under Peter Rejto, David Ying, and Steven Doane.

Professor Feldman has been a member of the Roanoke Symphony Orchestra since 2008 and has performed as a concerto soloist with the Boise State University Orchestra, the New River Valley Symphony, and the Shenandoah Conservatory Orchestra. His popular music ventures include appearances with Charles Billingsly, D.J. Spooky, Liza Minnelli, Art Garfunkel, and the Trans Siberian Orchestra, where he was a featured soloist in 2011. Professor Feldman also remains active as a recording studio musician, having worked with artists both nationally and internationally.

In addition to performing and recording, Professor Feldman has served on the faculty at Ferrum College (Va.) and as a resident artist with the James String Quartet at Lynchburg College. Additionally, he has been a guest lecturer at the Virginia Tech School of Performing Arts. Professor Feldman has served as string orchestra director at Faith Christian School, Parkway Christian Academy (Va.,) and as an assistant teacher at the Virginia Tech String Project.

Professor Feldman is a winner of both the Virginia Music Teachers Association and the Boise State University Concerto Competitions. As a chamber musician, he has won the Virginia MTNA chamber music competition and the Boise Chamber Music Society’s String Quartet Competition. In 2013, Professor Feldman became one of the first resident artists at Carilion Clinic in Roanoke, VA through the Dr. Robert L.A. Keeley Healing Arts Program.

Professor Feldman serves as an adjunct instructor of cello and bass and Assistant Professor.