During a special military appreciation halftime show at Liberty University’s regular-season football finale against New Mexico State on Saturday at Williams Stadium, decorated United States Marine Corps combat veteran Dennis Janiak will be presented the George Rogers Champion of Freedom Award for his service in Vietnam (1967-68) and for the impact he has made in the lives of many veterans through his work with the Military Order of the Purple Heart.

Last year’s recipient, the Rev. Brian Moore, a retired Sergeant First Class in the U.S. Army National Guard and a Purple Heart veteran, will present Janiak with the honor.

Since 2010, Liberty has given the award annually to an individual who served in the United States Armed Forces and went above the call of duty, displaying extraordinary heroism while in the service and continuing to be an outstanding ambassador in their community. The award’s namesake honors Purple Heart and Prisoner of War Medal recipient George Rogers, who was taken as a prisoner of war by the Japanese during World War II and survived the Bataan Death March. Rogers was CEO of Thomas Road Baptist Church’s “Old Time Gospel Hour” and finished his career at Liberty as Vice President of Finance and Administration. He died in 2019 at age 100. A statue of Rogers stands at Williams Stadium and includes names of the award recipients.

“I’m just humbled by the whole experience,” Janiak said. “I’ve never looked to be rewarded for anything that I’ve done. I just feel that I’ve done what I’ve done because it was the right thing to do. And to be recognized for my service and for the service for my country is humbling … because I always believed in service to others and service to my country.” 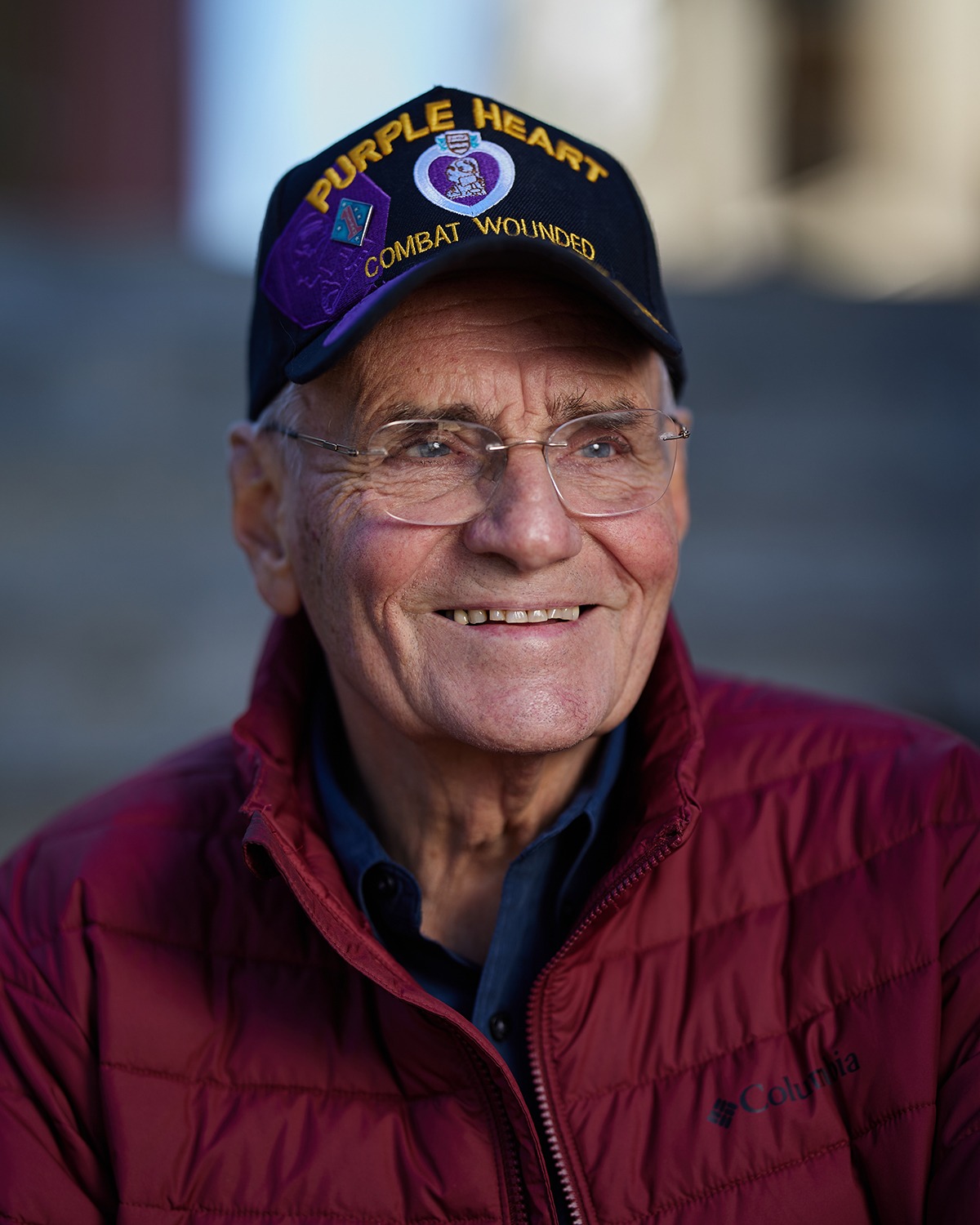 After enlisting with the Marine Corps in 1966 to help pay for the last two years of his college education at Canisius College in his hometown of Buffalo, New York, Janiak received orders to go to Viet Nam in 1967 after completing basic and advanced training. By February of 1968, he found himself in the thick of the Vietnam War with the 5th Marine Regiment. It was during the Battle of Hue when one of the lead elements of his platoon was ambushed.

“We went forward to try to give cover,” he said. “There were two Marines who were shot and lying in the street.”

While a machine gunner gave them cover from behind, Janiak and one of his comrades darted into the street to rescue one of the injured Marines.

They were almost to safety when a rocket-propelled grenade (RPG) exploded near them, knocking Janiak and his fellow Marine to the ground. His head took the majority of the impact as he landed, and metal shrapnel cut into his arms, chest, and face.

“I think they were firing it at the machine gun, and they had bad aim,” he said.

Janiak’s wounds became infected, but after receiving treatment that included having a large piece of metal that was lodged in his arm against the bone removed, he returned to duty, finishing his two-year commitment with the Marines in June of 1968 with a different perspective on life after having risked his own.

“There were times when I thought I wouldn’t make it back and I thought about what it would be like if something happened to me,” he said. “There were times when I was scared. In action, everything takes over and you don’t think about things like that. But when the action’s over, or you’re waiting (for it), you kind of think about a friend of yours that’s seriously wounded, or you see somebody get killed, and you always think that it could be you.”

After returning from Vietnam with a Purple Heart for his bravery, Janiak lived in Buffalo so he could complete his bachelor’s and master’s degrees. He married and began a 36-year career with Abbott Laboratories that would include moves to six states. The family’s last move landed them in Virginia, where Janiak retired in 2011. He and his wife, Linda, reside on a 143-acre horse farm near Altavista.

Due to the difficult memories from his time in Vietnam, Janiak chose not to tell anyone outside of family and close friends about his experience for decades. That was until his son shared with his high school class how much he looked up to his father for his bravery and valiant efforts to lay his life down for others. That awoke in Janiak a desire to help other veterans receive much deserved recognition for their service.

“I became more open about what I did during the war, and it was a little bit after that that I became involved with the Military Order of the Purple Heart,” Janiak said.

The Purple Heart is the nation’s oldest military award and dates to the American Revolution. It is the nation’s oldest military award, introduced as the “Badge of Military Merit” by Gen. George Washington in 1782. It is one of the most respected medals that U.S. military members can receive. The medal in use today was established in 1932 and given to those wounded or killed in time of war. Well over a million medals have been given out since 1932.

Soon after Janiak became an active part of the Military Order of the Purple Heart, he was informed that Monument Terrace, a memorial in Downtown Lynchburg that honors military members from various wars, did not have anything signifying Purple Heart recipients, prompting him to start a fund drive.

In 2008, a Purple Heart Monument joined the other military monuments at Monument Terrace.

“We raised enough money to get the monument, and the next thing I know, we got people volunteering and we got the city involved,” Janiak said. “They approved us putting it up there and they got some of their architects and engineers to help us with design and to make it compatible to that whole Monument Terrace that honors the different wars.”

Janiak’s work with the Military Order of the Purple Heart is what originally led him to connect with Liberty. In 2017, along with fellow members of the local MOPH Chapter 1607, Janiak presented Liberty with a plaque designating it the first Purple Heart University in Virginia for its support of military members, including veterans and their families.

“They are very supportive of veterans and military,” he said.

In Liberty, Janiak also saw an approach to life that felt familiar.

“They’ve done so much for this community to grow and to bring businesses here,” he said. “Just their philosophy and what they are teaching the young men and women who go there really fits in to the same life philosophy that I have about how we should treat people and what our responsibility is to others in this world. I have a lot of respect for Liberty.”

In addition to the work he has done and continues to do with military chapters in the area, Janiak is also an active member of his church and has supported and traveled on mission trips to Tennessee and West Virginia as well as Puerto Rico.

In his free time, Janiak enjoys working on his farm and spending time with Linda and their three children and seven grandchildren. 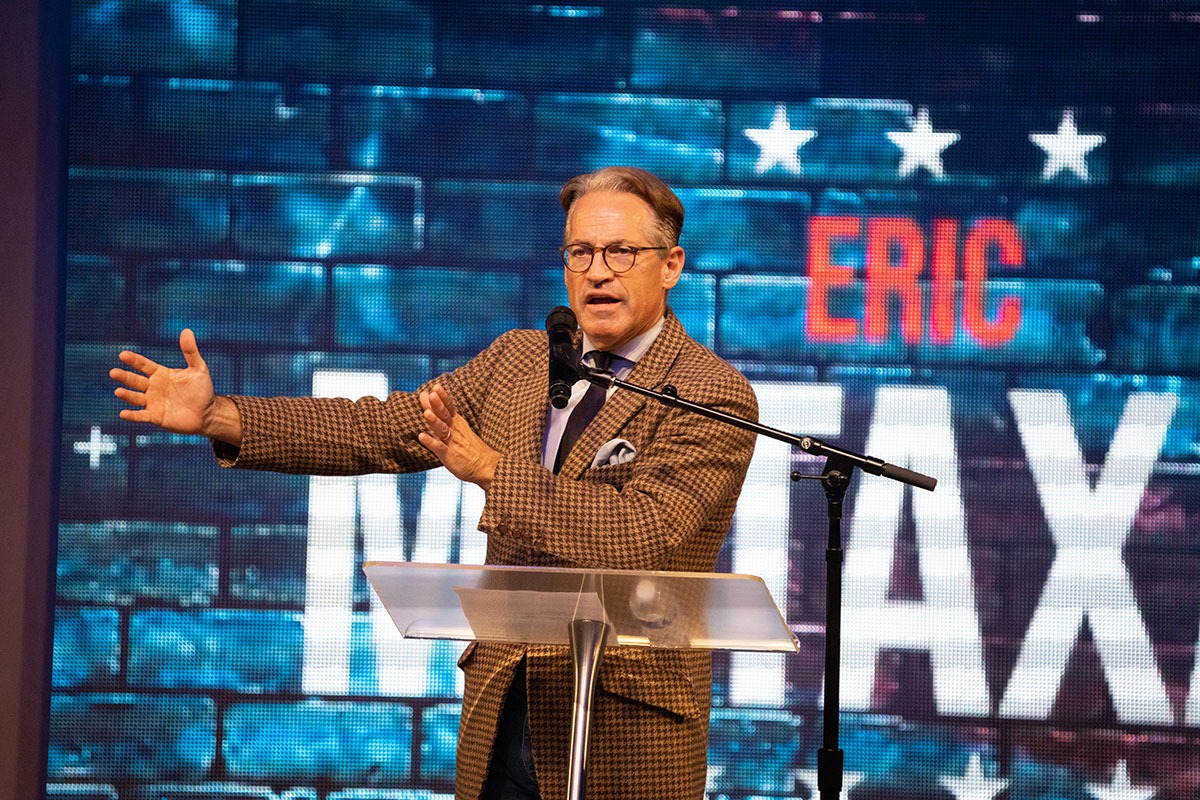 Standing for Freedom Summit calls for Christians to impact culture