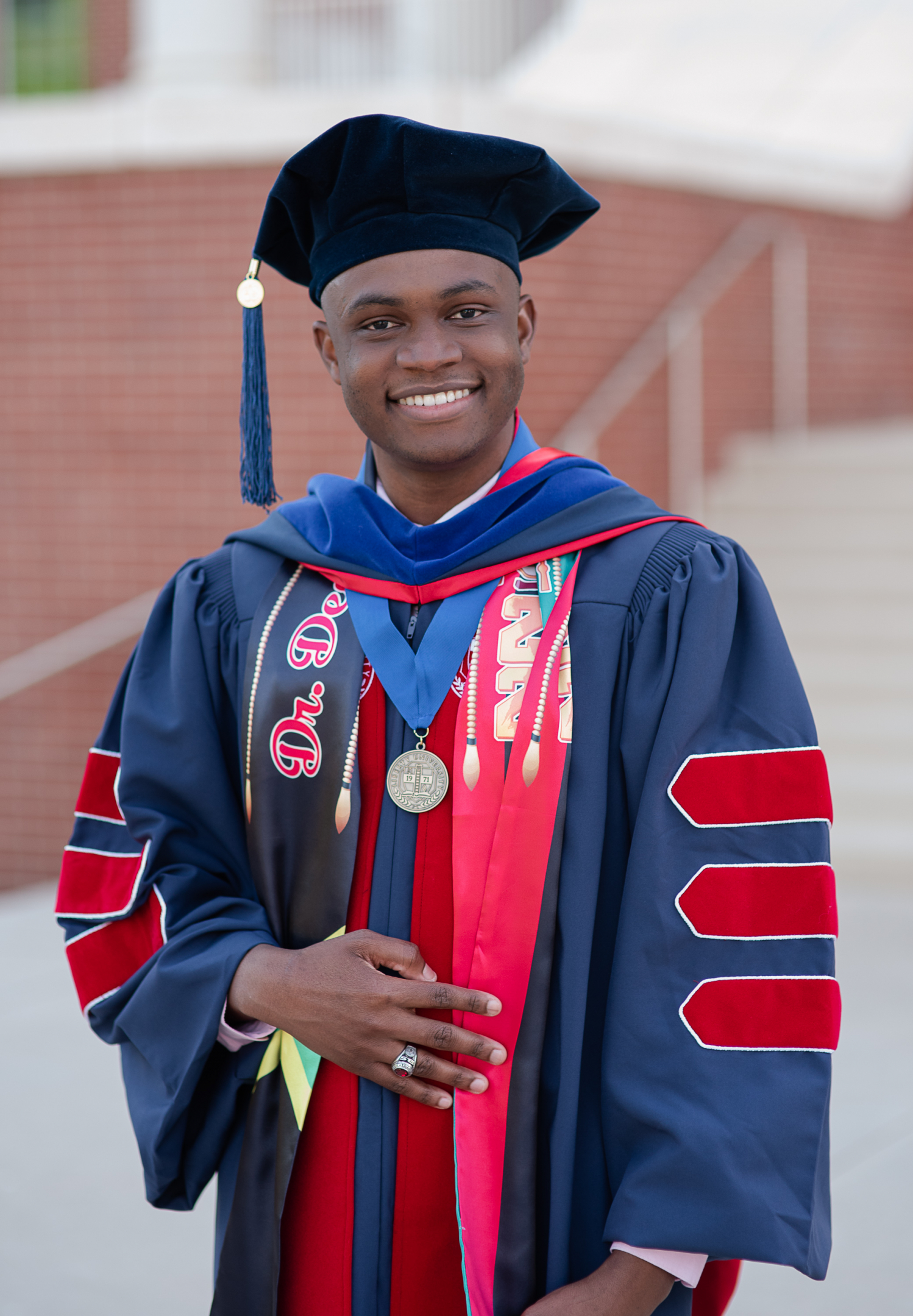 Deneil Christian (’21), who earned a Ph.D. in Criminal Justice, was recognized at the Helms School of Government’s in-person degree presentation ceremony during the 48th Commencement on May 12.

Originally from Jamaica, Christian first became interested in the criminal justice field when he volunteered at the local police station during high school. He said he came to admire the officers’ work.

“I just really liked the diversity of the work that officers were doing,” Christian said. “It was just very interesting from the various interactions that I saw at the police station, the calls that they went out on, and just being around them, so I got interested in what they were doing.”

He later spent a few years as police constable for the Jamaica Constabulary Force in Kingston.

Christian moved to the United States in 2013 and held different roles in criminal justice, including a year as an officer in the New Orleans Police Department, before transitioning to academics and teaching criminal justice and business at a private high school in Philadelphia where he could live out his passion for the teaching and mentoring of young people. He had earned bachelor’s and master’s degrees in criminal justice, but still remained adamant about earning his doctorate — a goal he’d envisioned since childhood. When he found Liberty’s new doctoral program in criminal justice, he knew it would be a good fit as it allowed him to continue teaching while studying from home.

“I was just starting my first year as a high school teacher, so there was no way I was going to get time off to attend a program with a residency, and then Liberty was just launching their Ph.D. in the fall, so I looked into that,” Christian explained. “They also had the discount for first responders, and I qualified. So that was a plus.”

The Helms School of Government began offering 100 percent online doctoral degrees in Fall 2018 with the Ph.D. in Criminal Justice and Ph.D. in Public Policy. In addition to those degree programs, current doctoral offerings include the Doctor of Public Administration, Ph.D. in Public Administration, and the Doctor of Law and Policy, which launches this fall.

Interest in the school’s doctoral programs continues to grow, from 437 students enrolled in the first year to over 1,900 this past academic year.

Ron Miller, online dean of the Helms School of Government, said the programs are designed to give industry professionals the ability to advance their education and career opportunities while still working full time and from the comfort of their own home.

“We’re looking at people who are career professionals who are either looking to advance their careers, they’re looking to hold positions of greater responsibility, or there may be people who are interested in taking a different approach to their life and career,” Miller said. “The idea that you can do whatever you need to do from where you are is something that’s very attractive to people. We’re about maximizing accessibility and inclusiveness so that as many people as possible who want to advance themselves can get it.”

“We’re excited about these programs because just from our survey of what’s out there, there’s not a lot of 100 percent online programs in these disciplines. So, we feel like we’re offering something unique,” Miller added.

Christian said he appreciated his place in the program’s early history and has found ways to connect with his fellow online doctoral students.

“Anybody who has ever been first in anything, it’s creating that part of history, so that’s always a great feeling,” he said. “One of the things that I did was to create a Facebook group specifically for this program, which has grown to over 100 students, and it’s been really a great space for us to support each other.”

Drawing from his background as both a teacher and a youth development aide, Christian focused his dissertation on the educational experiences of former juvenile offenders who completed their high school diploma or equivalent while residing in a juvenile correctional facility.

“Based on my experience working at a juvenile correctional facility earlier in my career and the fact that at the time of pursuing my Ph.D. I was a high school teacher, I thought it was a great opportunity to combine both education with juvenile justice, high school education, and juvenile matters.”

Christian will start his new job as an assistant professor of criminal justice at the University of the Virgin Islands this fall.