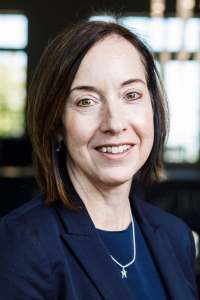 After graduating from James Madison University, Professor Lafon began her accounting career as an internal auditor with a financial institution. Upon passing the CPA exam, she worked in a regional public accounting firm based in Richmond, VA. From there, she began working for a publicly-traded, real estate investment trust (REIT) and moved up to the controller position where she was responsible for the corporate accounting and financial reporting departments.

Her niche is in financial reporting, which involves the preparation and filing of financial statements (Form 10-Qs and 10-Ks) with the Securities and Exchange Commission. After working at the REIT, she began consulting for other publicly-traded companies including Capital One. After consulting, she began working as the Controller and eventually the Chief Financial Office at a smaller REIT.

She moved to Lynchburg, VA in February 2016 and began working at Liberty University as the Director of Budget and Finance in the Provost’s Office. Professor Lafon’s goal was to teach accounting. She has had a 25-year fulfilling career in the accounting field and hopes to transfer that knowledge and experience to students in order for their success both professionally and personally.

Professor Lafon is a licensed CPA in the state of Virginia.