For the fifth Memorial Day weekend in a row, William Byron, NASCAR driver and student of Liberty University Online Programs, will race in the 600 Miles of Remembrance at his hometown track of Charlotte (N.C.) Motor Speedway honoring a fallen service member with Liberty connections.

On Sunday, May 29, the No. 24 Liberty University Chevrolet Camaro ZL1 will don the name of U.S. Army Sgt. 1st Class Ronald “Aaron” Grider on its windshield while featuring a full patriotic paint scheme. The Sunday night race will be broadcast on FOX starting at 6 p.m. EST, following a pre-race military salute with demonstrations from Fort Bragg, N.C., where Grider formerly served for five years in the Special Operations Command (Airborne).

At the time of his death, Grider, originally from Alton, Ill., was pursuing a B.S. in Multidisciplinary Studies. He was killed on his 30th birthday on Sept. 18, 2010, by machine gun fire while serving in the U.S. Armed Forces’ Operation Enduring Freedom in Afghanistan.

Grider received the Purple Heart and is a three-time Bronze Star Medal recipient. He had served on previous deployments to Afghanistan as well as Iraq for Operation Iraqi Freedom.

“Memorial Day is such a special day to so many families to honor all of those that we have lost and their loved ones still here,” Byron said. “It means a lot to have Army Sgt. Grider’s name on the car, especially with the connection of him being a Liberty University online student that was pursuing his degree. It’s special to honor him. I’m sure his family is going to be thankful to see his name on the car. Hopefully we can have a great race for them and get them a win. That would be a great way to honor him and super special for everyone involved.” 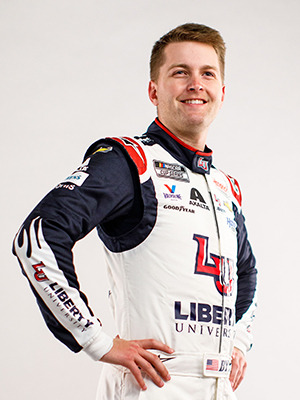 The 24-year-old strategic communication major is one of only two Cup Series drivers with multiple race wins this season and currently sits fourth in the driver points standings through 13 races, already locked into his fourth consecutive Cup Series playoff appearance.