Over this past six months, a team of students from Liberty University’s School of Engineering (LUSE) helped develop a prototype for a football helmet based on “creationeering” principles discovered by LUSE Dean Dr. Mark Horstemeyer — just in time to enter it last week into the “2021 NFL Helmet Challenge.”

“I’m very happy with how it turned out,” said Tate Fonville, an engineering PhD candidate and research fellow at Liberty who previously studied under Horstemeyer at Mississippi State University. “We had a bit of a hiccup right at the end and we had to remake one of the components. The guys came in and we were able to scramble and pull it all together and it looks fantastic.”

Previously, Liberty’s project — undertaken in partnership with Genesis Helmets, Inc., using properties found in God’s creation, such as the bighorn sheep’s rack and woodpecker’s beak — received a $25,000 prize for its second-place showing in the NFL’s “1st and Future” competition, held in conjunction with Super Bowl LV.

Since then, the student-led team of researchers has incorporated a helmet shell that is lighter in weight and offers a significant improvement in performance testing and a different type of foam liner material that maximizes energy absorption in order to minimize a helmet impact’s damage to the brain.

“I was able to do a lot more computational modeling and simulations over the past few months where we actually incorporated our multi-scaled, physics-based brain model, which we believe is the most advanced available right now,” Fonville said, noting that it captures the brain’s mechanical responses to damage that accumulates at different length scales. “We were able to make significant improvements in our liner technology, and that, coupled with the new shell design, really helps our helmet to look and feel good, but also perform much better.”

For the current competition, which had a July 14 deadline, the helmet will go head-to-head with heavyweight manufacturers such as Riddell, Schutt, Vicis, and Xenith, for a $1 million first-place prize.

Previous prototypes designed by Riddell and Vicis incorporated 3D printing and optimized lattice structure that helped make them the top-performing helmets in 2020 and 2021, respectively.

An all-star panel of judges will evaluate the helmets’ adoptability and feasibility before announcing the winner in mid-August, before the start of the NFL regular season.

“They’re looking to fund innovators who actually have a good, well-performing product … (and) a high chance of coming out into the market as soon as possible,” Fonville said. “That’s where we really need the funding. We’ve got this product, and we’ve got the people. We just need the money to actually produce a product for the masses.”

“We’re hoping the NFL doesn’t just give money to the people who have already got everything they need,” he added. “We would hope that they would want to support innovators like us who have actually taken a great deal of effort into analyzing what’s going on in the brain and producing a product that performs well and actually functions to protect the brain.”

Fonville spoke with Horstemeyer on Thursday after shipping out the helmet and they prayed over it.

“We prayed that people would see it with the right eyes, that they would interpret the data honestly, that the helmet would survive the testing,” Fonville said, “because it’s much bigger than just us and a helmet — we’re representing Liberty University, creationeering, and Christian engineering.”

Fonville said the helmet research project is among the first of endless innovations Liberty undergraduate and graduate-level students will have the opportunity to develop out of the Center for Engineering Research & Education (CERE), located in nearby Bedford County.

“We’re trying to establish a model for the students to follow in our footsteps,” he said. “We’re showing them, ‘You can use your innovation, your ingenuity, your creativity, and your intellect to come up with things that are life-changing,’ what Dr. Mark (Horstemeyer) likes to call redeemed research. It’s research inspired by God and blessed by God to benefit humanity.”

One of those students is Chinemerem “David” Osuji, a summer intern and rising fifth-year computer engineering major who is also minoring in computer science and mathematics. Osuji, who grew up playing soccer in Nigeria, is the nephew of Helms School of Government professor Dr. Edna Udobong.

He is developing a telemetry system that can be embedded in the helmet to notify coaches and trainers on the sideline of the magnitude and severity of a head impact sustained by a player on the field so they can make better informed decisions during real time.

“What David’s working on, you could consider it necessary next steps or future technology that we’re hoping to incorporate next,” Fonville said. “The helmets of the future are all going to be electrified. They’re all going to have some kind of a communication system, some kind of a response system, so we want to be right there with them when they get there, maybe leading the charge with that.”

Osuji has gained a much greater appreciation for research since starting his internship in May.

“Just doing this helmet research has allowed me to understand the misconception that research is just too much reading and that it isn’t fun,” Osuji said. “That’s not true at all. Research is fun because what you learn, you’re actually applying. You’re experimenting, you’re testing, and you’re discovering new things. That’s what I’ve learned so far. Thinking about how much of an impact this research is going to have, it’s just incredible. We’re not just looking at football helmets. It’s going to expand much more.”

Working in partnership with the Israel national American football team and Ariel University, located on the West Bank near Jerusalem, Liberty is preparing to test the helmets, equipped with the telemetry system, in live action.

Fonville’s dissertation research involves testing and tracking the assembly, production, logistics, and manufacturing of the helmet.

“It’s been a very cool experience to see my research really come to life,” he said. “On any given day, I’m doing a lot of the fundamental research work, I get to do product-design development, I get to do some artwork and some crafty things, putting things together. It’s been great.”

He has seen CERE develop from a nearly vacant building, two years after it was purchased by Liberty in 2017, into a premiere research facility since he arrived in May 2019.

“It’s incredible what we’ve been able to produce the past two years with Dr. Mark and his brother (CERE Lab Director Stephen Horstemeyer) and (CERE Executive Director Dr. Rich Diddams), and all of the people who work out here,” Fonville said. “Dr. Mark has been so persistent in trying to bring his vision of being a world-class Christian institution to reality. We have some of the best equipment available of any engineering school or research facility. It’s all new, and there’s so much opportunity here. We have the space and we’ve got brilliant faculty involved in these research projects … (which are) going to be fantastic for our growth and our future as a research and a learning institution.” 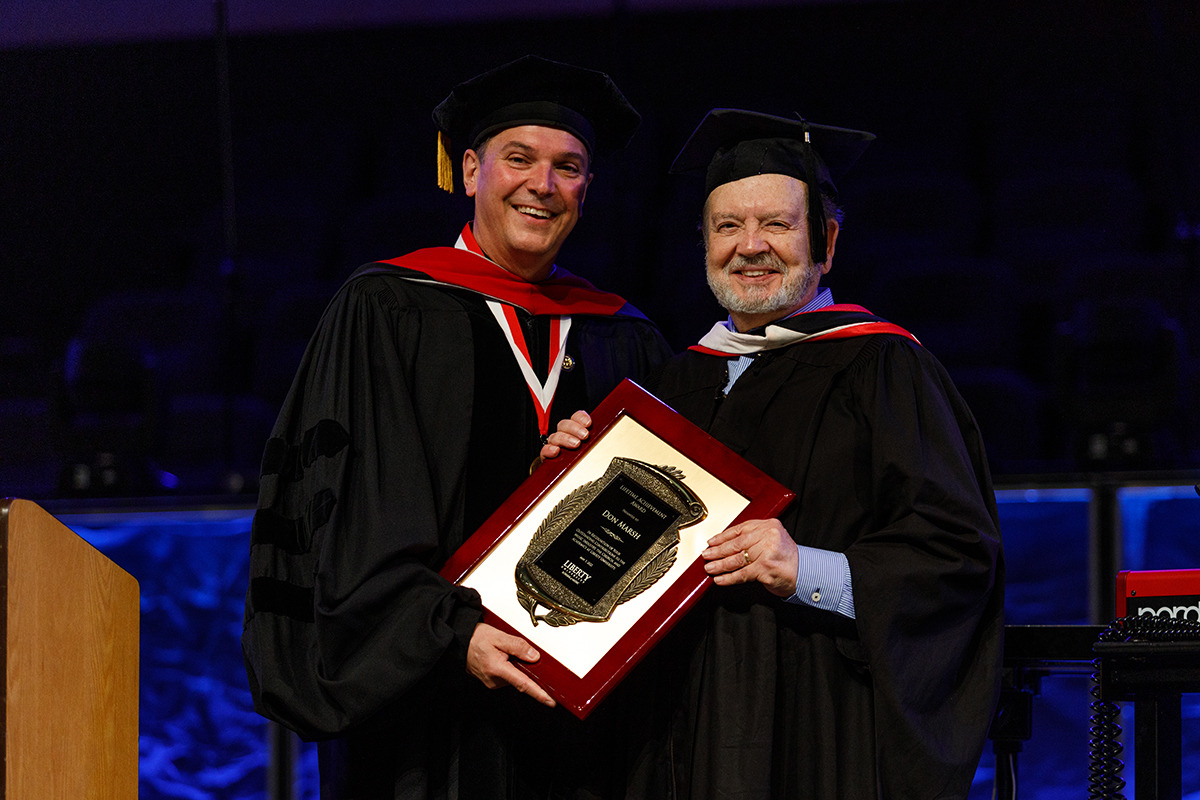