Ending war one movie at a time 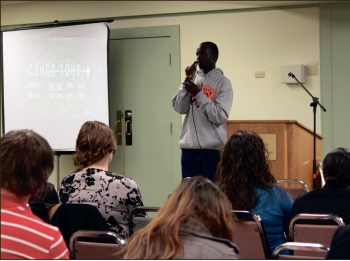 Twenty-five years ago, a war began in northern Uganda that has consequently robbed an entire generation of their childhood and caused the lives of millions to be ruled by fear and violence. But it is time for the war to end.

The Liberty chapter of Invisible Children (IC) is seeking to end the war, which is taking place over 7,300 miles away, through awareness and the power of the media. At the group’s movie screenings, representatives (known as roadies) from IC are present to tell students about what is going on in Uganda and how they can get involved.

At the chapter’s latest screening, which took place at the Residential Annex on March 3, a group of 110 students gathered to hear from these roadies and watch the documentary, “Tony.”

The film follows the story of Tony, a former night commuter in northern Uganda. Like thousands of other Ugandan children, Tony spent his childhood sleeping in abandoned buildings patrolled by one or two guards outside of his village so that he would not be kidnapped and violently forced to join the Lord’s Resistance Army.

In 2010, Tony was able to visit America as part of IC’s team and speak on behalf of the children in northern Uganda. The film follows him as he shares his story and becomes close friends with Nate Henn, an IC worker.

In July 2010, Henn was given the opportunity to live out his lifelong dream of going to Uganda to visit Tony and see firsthand all the things he had heard about and dedicated his life to. During his trip, Somali terrorists bombed the rugby field where Henn was watching a televised version of the World Cup Final and consequently killed Henn and more than 70 others.

A month after losing a close friend, Tony was on the road again, continuing to spread the message Henn died for and pleading with people to help Uganda.

“The movie gives a sense of urgency,” said Lauren Edwards, president of the Liberty IC chapter. “Terror follows Tony everywhere. Anytime something good happens to him, something bad happens in return. But he leaves his home country to come to America and pour out his entire life to beg people to pay attention and to call them to action.”

“What he’s doing is leaving everything that’s comfortable and going on behalf of Uganda and this tour. It brings an awareness that we can’t be confined to this day. We can’t live our lives as if the rest of the world isn’t being affected by evil. What action are we taking?” Peguero said.

Junior Randy Carroll has been involved with the school IC chapter since its inception in 2009. According to Carroll, though fundraising is important, the organization needs more than money.

“The thing they need most are supporters,” Carroll said. “Throwing money at the problem isn’t what’s going to fix it. Ultimately it comes down to the dedication of the people raising awareness for it and talking about it,” Caroll said.

Peguero echoes this belief, saying that while there is nothing wrong with supporting a cause by buying merchandise, true support goes a lot deeper.

“This organization has really defined the T-shirt activist and those that actually do something,” Peguero said. “You could just buy the merchandise or actually find ways to be active in helping out.”

There are plenty of ways someone can actively get involved in the work IC is doing. Currently, the chapter is looking for more people to get involved.

According to Carroll, the chapter needs people to help set up and put on events, but also creative people who can think of and execute fundraising ideas.

Students can also participate in IC’s upcoming 25 event, which will help raise money for rehabilitation centers in Uganda. During the 25-hour event, which takes place in April, participants will take a vow of silence and raise money for the center by setting up their own personal page through the IC website.

At the end of Thursday night’s screening there was a worship and prayer time, intended to give movie goers the opportunity to reflect on what they had just seen and let them know the prayer needs of Uganda and IC. Movie attendees also signed two vintage quilt covers donated by Edwards’ mother. One of these will be given to Tony and the other to the Henn family.

“We want both bodies to know that while you may have never even heard of Liberty University, we are praying for you and thinking of you. We’re there for them,” Edwards said.

For more information about Invisible Children, check out www.invisiblechildren.com

To find out how to get involved with the Liberty chapter of Invisible Children, visit their Twitter (lus4s), Facebook page (Invisible Children Liberty University Chapter) or e-mail them at invisiblechildrenlu@gmail.com.