Comic book artist Sergio Cariello visited Liberty University last week to launch an exhibition of his illustrations for the community and share his testimony as a Christian illustrator working with comic giants Marvel and DC Comics.

Liberty’s Art Gallery unveiled the eye-popping exhibit — with illustrations ranging from iconic superheroes and villains to mesmerizing Bible scenes and gripping portrayals of Christ’s death — on Thursday, Sept. 18. Students, staff, and families formed winding lines all through the walkways of DeMoss Hall waiting for a chance to see the display and meet Cariello.

On Wednesday, Cariello met with studio and digital arts students for a Q-and-A session, sharing tips and tricks of the trade and encouraging aspiring artists to keep God first.

“Cariello’s work is excellent,” said Todd Smith, chair of SADA. “His work stands the test in the Christian marketplace as well as pop culture.”

Dr. Norman Mintle, dean of the School of Communication & Creative Arts (SCCA), was excited to see the large turnout at the event.

“We want our students to see this and to aspire to that kind of excellence. That’s really what it’s all about — exposing our students and our faculty and our staff and our community to artists of great excellence,” Mintle said. “(Our graduates) minister through their art to a culture that pays attention to the media probably more than anything else.” 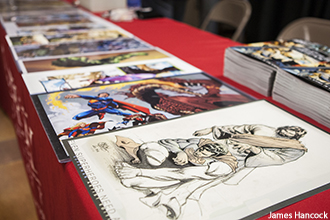 At the exhibit, Cariello drew special attention to his two favorite pieces — one showing Superman bowed before Christ in subjection to receive a blessing, and the other depicting Christ bearing His cross through the city of Jerusalem. The latter, he says, is what led to “The Action Bible,” a 750-page, full-color graphic novel boasting 215 Bible stories, making it the most complete picture Bible in existence. Cariello is currently working with its publisher, David C. Cook, on a successor to the biblical comic — of which a portion explaining the Gospel story has been freely distributed to over 39 million children of various languages across the globe.

Cariello noted that he doesn’t like to divide the sacred from the secular; instead, he views his role as that of a light for Christ within the art community — a vision Liberty shares for its own graduates.

“I see Liberty as a very powerful entity … training all kinds of youngsters to be good in what they do — in whatever capacity you could think of — training them with a foundation based on our faith,” Cariello said. “That, to me, is very powerful.”

Cariello was decided in his career path from age 5 and was a published cartoonist at age 11 for a local newspaper in his native Brazil. He put his faith in Christ in 1979 through Word of Life. He also attended the Kubert School of Cartoon and Graphic Art, where he later taught. Since then, he has contracted with Marvel, Disney, DC, and most recently, David C. Cook.

“God has for each of us a task. We are all part of His big book,” Cariello explained to students. 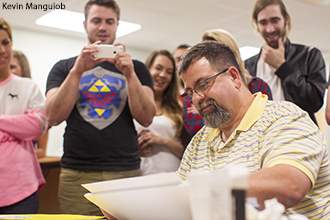 Cariello said his heart had been touched by his interaction with Liberty’s art students, some of whom telling him about autistic siblings of theirs whose disinterest in books vanished upon reading “The Action Bible.” He drew the most encouragement, however, from seeing students resonate with his message of representing Christ through art in popular culture.

“Their attention and impact and feedback after the meetings, coming and talking to me, has made worthwhile all the time that I’ve spent here.”

Nathaniel Hudson, a sophomore student in graphic design, was excited to get a rare glimpse into what may become his future field.

“I aspire to be a comic book artist myself eventually, and I wanted to see examples of comic book art,” Hudson said. “The Liberty University arts department is unique because it offers opportunities for students to learn more about their craft professionally, and to use what God has given them to be professional artists.”

The Cariello exhibit runs from Sept. 18–Nov. 8, 2014, and will be followed by the Senior Art Show running Nov. 13 through Dec. 3, which will showcase pieces in a variety of mediums from SADA’s senior students. All exhibits are free and open to the public. The gallery is located on the fourth floor of DeMoss Hall, South Wing, room 4069. Persons interested may call (434) 592-7629 for details.