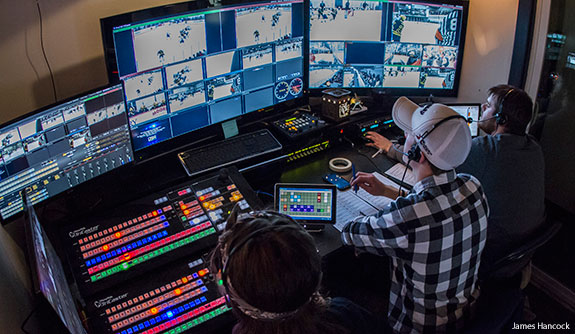 For the broadcasting and digital media majors from Liberty University’s School of Communication & Creative Arts (SCCA) involved, this past Saturday’s men’s hockey game played before a standing-room-only crowd at the LaHaye Ice Center was an ideal showcase for their cutting-edge technical production skills.

A team of nearly 40 students worked behind the scenes to create a live-streamed broadcast-quality webcast of the highly anticipated rematch between the Flames, ranked third in Division I of the American Collegiate Hockey Association, and top-ranked Arizona State University. 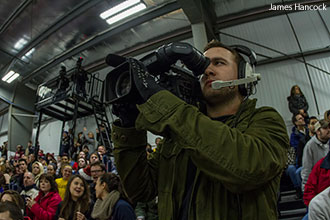 The special production, called “Saturday Night Hockey,” was the result of more than three months of planning by senior students Matt Atkins and Stephen Fogleman.

The three-hour show will be rebroadcast to more than 85 million homes through Liberty Flames Sports Network (LFSN) affiliates across the United States this Saturday, starting at 7 p.m. (EST).

“It was an initiative by the students that they created, that they researched, that they planned, and that they put their hearts and souls into,” said LFSN Streaming Producer Matthew Byrd, who supervised the event. “It was a lot of fun for the students because it’s something different. We’ve done 200 of these events the normal way, so we kind of broke that normality and did something crazy, just for the fun of it.”

Russ Martin, SCCA’s executive producer, said the degree of professionalism demonstrated by the students — many of whom volunteered their time for the experience — was extraordinary.

“I am very impressed with the drive for excellence and innovation that the students have put forth for this event,” Martin said. “It is a testament of their desire to go above and beyond routine production.”

Under supervision from Byrd, three Liberty seniors took lead roles in the broadcast: Matt Atkins, who served as the show’s producer; Stephen Fogleman, the director; and Ru O’Dell, the technical director.

“As the producer, Matt Atkins created the content, the theme of the game,” Byrd said. “He was the navigator. Stephen had his hand on the wheel, so to speak. As the director, he called the shots and saw how the camera (footage) was previewed. And Ru was the one pushing the pedals. She was the one hitting all of the buttons and controlling everything.”

A crew of videographers captured the fast-paced action all over the rink through the lenses of 13 cameras, including two stationed behind the goals, two in the teams’ penalty boxes, and one on a jib crane that swooped over the back left corner of the ice.  Four additional cameras were focused on the two broadcast booths — one booth in the second-floor media center overlooking the rink and one on the opposite corner of the arena.

The broadcast took a tremendous amount of synergy among students performing a wide range of functions. At the same time, the production required a technically complex fusion of input from a variety of sources.

“We combined three TriCasters for one broadcast,” Byrd said of the NewTek TriCaster integrated production systems, which simulate audio and video control rooms. “We had a small high definition remote truck outside that was handling the pregame and intermission desk over in the corner. Then, in order to be able to get all 13 cameras, we had to combine two of the switcher units, which is a feat in and of itself.”

“Our student producers and director worked hard to develop a concept that would work within the framework of our existing technical setup, while stretching the system to its limits,” Martin added.

Byrd plans to submit the final product to the Sports Video Group’s College Sports Media Awards competition, with the winners announced at the May 28 Sports Broadcasting Summit in Atlanta.

Next month, LFSN will broadcast another ACHA DI National Tournament Selection Show, as it did for the first time last year at LaHaye, announcing the 20 teams that qualified for postseason play. In September, the crew aired an ACHA DI preseason show, and in the near future, Byrd would like to see his team travel to produce a live webcast of an ACHA DI national championship game.

“That’s a goal in the next two years to see if we can get to the championship game and do it wherever it’s at.” 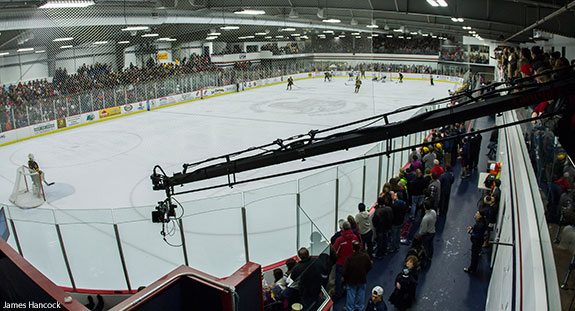 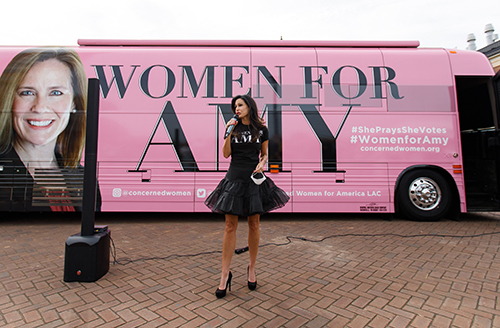