Alluvion takes off with Peter Pan 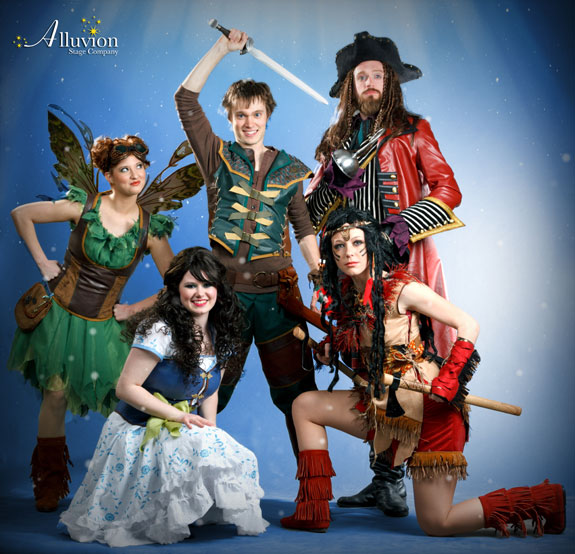 Alluvion Stage Company brings “Peter Pan” to life on the stage of Tower Theater for the first time at Liberty University. The show is Alluvion’s debut production and opens Friday, April 13, and with no shortage of magic, swashbuckling adventure, and singing and dancing, the show is sure to be a hit for viewers of all ages.

Alluvion is a professional stage company, distinct from Liberty’s Department of Theatre Arts, and seeks to enrich, educate and entertain the Lynchburg community by providing a superior theatre experience in a wholesome family environment. Alluvion allows students of the theatre department to collaborate with professionals, bringing Broadway-caliber shows to Liberty’s stage. (Read more here).

“Peter Pan” follows the adventures of the Darling children – Wendy, John and Michael – who discover Peter Pan, a real-life version of Wendy’s bedtime story hero, in their nursery. Pan is a boy who can fly and hails from Neverland, an enchanted place where children never grow up.

With the help of pixie dust and happy thoughts, Pan teaches the children to fly and leads them to Neverland where they encounter mermaids, Indians, wild animals and pirates, none as terrible as the villain Captain Hook.

Director Linda Nell Cooper, chair of Liberty’s Department of Theatre Arts, said with all of the fighting and flying in a mystical world, bringing the fantasy to life requires stunts, choreography and concepts never-before-seen at Liberty. 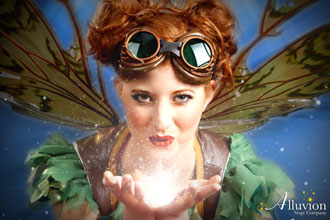 The imaginative, original concept features a complex, multi-level set and unique costumes, all designed and constructed by Alluvion’s production team.

“It is an original scenic design – making it appear as a whimsical Neverland. All of the costumes are original, made for each individual actor,” Cooper said.

To give life to the magic, Alluvion brought in Flying by Foy: “the most prolific and widely-respected theatrical flying service in the world.” Flight director David Hearn, who designed the flight for Liberty’s show, has multiple Broadway credits, including flying actress Cathy Rigby as Peter Pan.

“It’s a challenge when you have multiple people in the air. It has to be this well-timed out, choreographed event in the sky,” Cooper said of her reason for contracting Flying by Foy.

Students interested in being on a flight team are gaining valuable experience while working with the best in the business. A team of 12 students will operate the wires during the show.

Cooper added that acting in “Peter Pan” presents its own unique set of challenges, as 18-20 year-olds will be portraying children and are required to be skilled in dance, combat and vocals – both in singing and acting.

“It really takes a cast of triple-threats,” Cooper said.

She explained the part of Peter Pan, played by senior Caleb Hughes, is extremely strenuous. Hughes only leaves the stage twice during the three-act play and must transition from one big dance sequence to the next, all the while singing in the upper range of his male voice and performing stylized combat.

“This is the most challenging role I have ever done,” Hughes said. “Not because of one single aspect, but because there is so much going on. You have flying and fighting and choreography, as well as the acting and getting into character. Also vocally, it’s a pretty demanding role. All of that combined, it’s pretty tiring.”

Cooper also said that the set is very complex and has very little flat space, making it difficult to choreograph the dance and fight scenes. 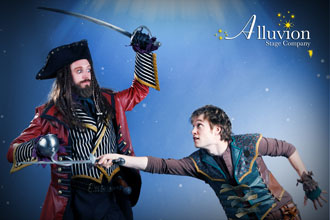 “I have really enjoyed the fusing of the alumni with the students and how that was such an easy embrace in coming together,” Cooper said. “Theatre is about collaboration. Artists can come from different places in the country, different generations, and as soon as we step on that stage, we have a camaraderie, and we are all working towards one goal.”

Cooper added that not only does Alluvion give students professional credits on their résumé, it allows them to work alongside and learn from industry professionals.

“It shows our students exactly how you do work in that professional field with people they have never met.”

In all, the show has 31 cast members and a crew of 22, showcasing Liberty’s student talent with 19 Irene Ryan Acting/Tech Award nominees participating, including actors Hughes, Jamie Cloutier (Wendy Darling) and Rachel Day (Tiger Lily) and stage manager Kaitlin Patterson. Several faculty members are involved with the project as well, four of which are recipients of the Kennedy Center Faculty Merit Award for Directing/Design, including Cooper, and theatre professor and Liberty alumnus Chris Nelson (also an Irene Ryan nominee), who plays the role of Captain Hook.

The musical is an adaptation of the stage play “The Boy Who Wouldn’t Grow Up” by J.M. Barrie, which he adapted several times and novelized (originally titled “Peter and Wendy” but later known as “Peter Pan”).

The idea of a boy who couldn’t grow up came after the untimely death of Barrie’s older brother David, who was 13. Barrie and his devastated mother took comfort in the thought that David would remain a child forever.

Barrie’s idea evolved into that of a ghost boy who aids frightened children on their journey to the afterlife. He began to tell these tales to cheer up his mother and his neighbor’s children, fusing the grim idea with his vivid imagination and witty humor.

“(Barrie) was haunted by this image of children who never got to see adulthood,” Cooper said. “It’s really quite beautiful to see his life portrayed in this children’s story.”

Cooper explained how Barrie’s life influenced so many elements of the story, including characters such as Wendy and the fairy Tinker Bell. Wendy is the mother Peter wishes he had and is portrayed as the perfect girl. Tinker Bell represents faith and can be killed by disbelief and revived through clapping and laughter.

Cooper said she and the cast used research on Barrie’s life and its correlations to his characters as inspiration for the show’s character development.

She added that the play has to strike a balance between the childish elements like imagination and humor and grown-up elements such as fighting and death.

Cooper said “Peter Pan” has a unique message for both children and adults in the audience.

“I want children to take away this feeling that it’s OK to be a child, to dream about flying and fighting pirates and having pixie dust thrown about the room, and that imagination is a wonderful thing and nothing to be afraid of,” she said. “I want for adults to take away that there is a piece of the child we were still inside of us and that should bring us lots of joy. We need to be reminded of that joy and let it resurrect in our lives.”

“Peter Pan” runs through April 29 with 15 performances. Show times are: