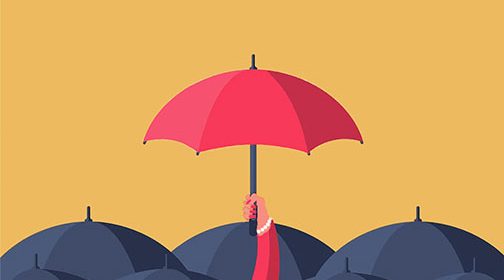 On a promotional poster, one red umbrella emerged from a sea of black ones.

That, said Dr. Lorene Wales, is a good picture of what it is often like to be the only woman in the room: you have to stretch your arm a little higher to find your place and are often less protected when a storm comes.

Wales, a professor in the cinematic arts department at Liberty, spoke at the Hancock Welcome Center about her experiences working in a male-dominated career field on Oct. 22, a part of a series hosted by the Office of Equity and Inclusion.

As a former film producer and production manager, Wales has often been the only woman in the room. She noticed this after studying race and gender representation for her Ph.D., and through the years as a professor.

In her presentation, Wales spoke on research that defined an “Only” as a person who is the only representative of their gender in a workplace environment. According to findings by Lean In, an organization helping women pursue their goals, about 20% of women report that they are often an “Only” compared to 7% of men. This number doubles for women of color, who also report facing the added expectation of speaking for their race.

Lean In’s research also found that female “Onlys” are more likely than other women to consider leaving their career fields, more frequently questioned on their competence, authority and judgment, and 80% of “Onlys” experience microaggressions at work compared to 64% of women in more integrated workplaces. They are also twice as likely to have been sexually harassed during their career. Additionally, women ask for promotions and raises at the same rates as men but are paid less on average than men in similar roles.

Wales shared this data, along with her experiences as an “Only.” When she worked in film, people hiring her only cared about the quality of her work, though she faced harassment and was the recipient of demeaning nicknames on set at one point.

Occasionally, she would use humor to confront sexist co-workers. One man consistently called her names like “baby cakes” and “sweetheart.” Eventually, Wales said, she called him “sweet britches” in return.

In the academic world, she encountered a man who openly opposed her hiring and called her a token. There, too, Wales eventually used humor to gently confront his perspective.

Usually, though, she prayed and relied on God to act while letting the quality of her work demonstrate that she was worthy of her position.

“When I did prove that I was more, then I got their respect— well, some,” Wales said. “If you’re looking for respect from all men, you won’t get it.”

Men who want to support female colleagues, Wales said, should treat them like any other co-worker: listen, and respect what they say.

Wales said she felt the most like an outsider in Christian workplaces, and found that men whose wives and mothers had never worked outside the home were less likely to respect her as a colleague.

“In a way it doesn’t matter what you do,” Wales said. “If they’re never going to change, it is not my job to change them.”

Instead, she focuses on following God and continues to pursue excellence in her work while trusting that He is in control of her career and the people around her.

Wales does not identify with the feminism movement and denounces mainstream feminism’s scorn for stay-at-home mothers and the movement’s support for abortion yet agrees with feminists that women should not minimize themselves or adapt their mindsets to fit into a male-centric workplace. Instead, she said, companies should recognize that the unique capabilities and perspectives of women are valuable assets and adjust their company structure to make full use of those qualities.

Unless companies adapt to take advantage of what women offer, they miss out. Wales said the same goes for churches, which often do not excel at valuing and discipling women outside of their roles as wives and mothers.

“Our woman-ness has equal value to the things that make men valuable,” Wales said. “We both — men and women — need to change the culture.”