Dr. Alveda King, niece of Martin Luther King Jr., shares stories about her uncle and her involvement in the pro-life movement at Convocation 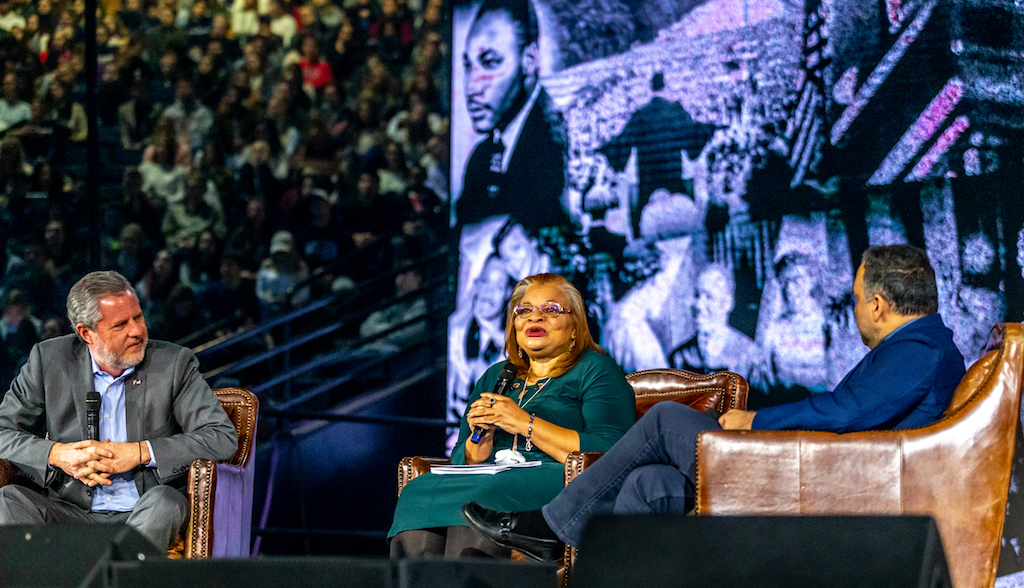 Liberty University hosted author and activist Dr. Alveda King at Convocation Friday, Jan. 17, to discuss a range of topics including civil disobedience, rights for the unborn and her family’s legacy.

The niece of the late Dr. Martin Luther King Jr., Alveda King discussed her journey from having multiple abortions and voting as a Democrat for decades, to eventually being coined as “the Conservative King,” and a pro-life figure. After her conversion to Christianity in 1983, she now firmly stands for the protection of people throughout their entire lives, starting at conception and ending at death, which is something she calls “womb to tomb.”

“What’s interesting is that my mom wanted to abort me in 1950 because she was a college student,” Alveda King said. “Abortion was illegal, but this exploratory procedure is what she wanted.”

According to Alveda King, her mother was persuaded by her grandfather to keep her baby after he described a dream he had several years prior, which described what the baby would look like. Alveda King claims this interaction to be a “prophetic ultrasound,” though she did not link it to her pro-life stance until many years later.

“I didn’t know then that I was born into the pro-life movement,” Alveda King said. “God called me away from my liberal living. I had two abortions, a miscarriage, divorce, I was just living in the world. In 1983, God said that he wanted me to give my testimony. So I became a voice for life in 1983 when I was born-again, but I had been rescued in the womb, and I didn’t know it.”

A woman’s right to choose what they do with their bodies is a constant theme in debates regarding abortion, but Alveda King makes the distinction that a baby is no longer your body.

These beliefs led to Alveda King standing against many of her family members, most of which are Democrats. Because of this, she developed a healthy attitude towards dealing with people whom she disagrees with.

“We always said at Thanksgiving dinner that we’re not going to take the turkey leg and beat each other with it,” Alveda King said. “When you don’t agree with someone, there are six things I recommend: gather your information, educate your audience, examine your own heart, go to the negotiating table, seek God and step six should be win-win.”

President Jerry Falwell chimed in, stating that he seeks to find the common traits between himself and those that he disagrees with.

“What I’ve learned is that just because you disagree with someone, does not mean you don’t have anything in common,” Falwell said. “In fact, some of the people you disagree with the most, you have more in common with culturally. When my father got sick in 2005, the only three national figures that sent him letters were Jesse Jackson, Ted Kennedy and Larry Flynt.”

Senior Vice President for Spiritual Development David Nasser pointed out the societal improvement since the days of Martin Luther King Jr., but acknowledged that improvement is always possible, and even in today’s world, people need to be active in fighting for what is right.

“In every generation, these truths (racial equality) must be proclaimed out of the word of God,” Alveda King said. “Even if you don’t quote chapter and verse, you must always have an answer, so we have to speak and teach with the understanding that John 3:16 is for everybody.”

Craft is the asst. news editor. You can learn more about him over on Twitter.