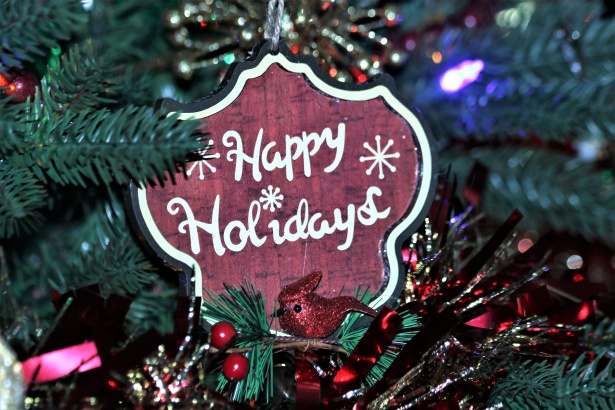 For some people, the phrase “Happy Holidays” incites indignation brought on by assumed disrespect. For others, the simple phrase encompasses their celebrations, whether that be Christmas or another winter festivity.

“Happy Holidays” is not a disrespectful phrase towards Christians and Christmas, but instead it is an inclusive one that brings different walks of life together in joyful holiday spirit.

According to a Public Policy Polling (PPP) survey from 2016, more than 80% of Americans aren’t offended by either phrase and frankly don’t care. According to the survey, more people were offended by “Happy Holidays” than they were by “Merry Christmas.” Being offended by a simple holiday greeting, no matter what the receiver celebrates, sounds pretty ridiculous.

Many people consider it offensive to their religion, with Christians taking most offense to those using “Happy Holidays” over “Merry Christmas.” At the end of the day, does it really matter? Should the church really be fighting over which phrase is least offensive instead of rallying together over more important issues?

Rather than being offended by this simple phrase, we should see this greeting as an opportunity to show kindness and be inclusive of other cultures and people. The holiday season is celebrated by many different religions and cultures, but not all of them celebrate Christmas. Even Christians celebrate multiple holidays within this two-month period, including Thanksgiving and New Year’s Day.

It’s a sign of respect when “Happy Holidays” is used over “Merry Christmas” when it is well known that the receiver does not celebrate Christmas. It doesn’t reflect well on Christians to blatantly disrespect others in an attempt to “trigger” them or urge them to celebrate something they simply don’t. Our witness is stronger when we’re respectful.

According to the PPP survey, only 3% of those surveyed would be offended by “Merry Christmas,” compared to 13% being offended by “Happy Holidays.”

In the height of Donald Trump’s push to end the “War on Christmas,”  many people wondered if his request to use only “Merry Christmas” was more harmful than using “Happy Holidays.”

When someone uses the phrase “Happy Holidays,” it’s very likely they’re not using it to spite Christ in Christmas, or to “trigger” the one they’re greeting. It’s safe to assume the phrase is being used with “Merry Christmas” as interchangeably as saying “Hi” or “Hello” in a greeting.

Christians should focus less on which phrase is most offensive and more on how to love those that use that different phrase. This particular argument takes away the joy of Christmas and the holidays as people put aside their differences for a season and are able to enjoy the festivities, no matter which holiday they prefer.