Moscow native laces up to skate in LaHaye Ice Center 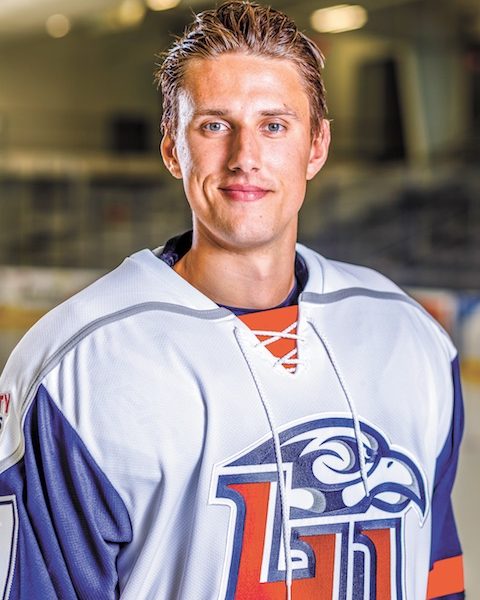 As Liberty’s DI hockey team prepares for an average game on a Friday night, Arturas Laukaitis straps on his skates in Lynchburg, Virginia, to play the sport he grew up playing 5,000 miles away. But the Moscow, Russia native didn’t always love hockey – much less imagine how far the game would take him.

“When I was four years old, my dad just pushed me onto the ice,” Laukaitis said. “I did a couple laps around the ice rink, and I said, ‘Dad, it’s not for me – I don’t like it.’ He said, ‘I already bought the gear, so you better use it.’ And then I liked it – the rink and my school were right by my house, and (hockey) kept me out of trouble.”

Traveling to the rink every day as a kid, Laukaitis had no idea that the sport would change the trajectory of his life.

Today, 18 years into his career, hockey has taken Laukaitis all the way from Russia to Liberty University, where he is paying his own way through college. He aims to become a businessman and make the most of the opportunities he sees as the essence of the American dream.

Growing up in a working-class Russian home with a Lithuanian father and Russian mother, Laukaitis quickly learned the ferocious work ethic that has driven much of his life, both on and off the ice.

“My parents are not very wealthy, and growing up if I wanted something, I had to work hard for it – many times I didn’t get whatever I wanted because we couldn’t afford it – and I hated it,” Laukaitis said. “(Now) I work hard at everything, and it helps with hockey too. You can transport it from life to the ice. My dad always told me, ‘If you cannot score the goal, just play hard and show your character.’”

Determined to succeed at his sport, Laukaitis left his home behind at age 14 to play hockey overseas. He played for brief stints in Germany and Lithuania before moving across the Atlantic four years ago to play junior hockey in the U.S.
and Canada.

As a dual citizen of both Russia and Lithuania, Laukaitis represented Lithuania on the international level, winning an international gold medal in 2017 in front of 17,000 fans alongside a team largely made up of professional hockey players.

Laukaitis did not originally plan on taking the rink for Liberty in college, however.

When he began his college career in America, Laukaitis was first at NCAA DIII school University of Wisconsin-Stout, but he decided to transfer when his Ukrainian friend and teammate Dmytro Kobylyanskyi transferred to Liberty.

Born in Canada, Flames Head Coach Kirk Handy has a particular emphasis on helping international students adjust to Liberty, using the team as a way to help students like Laukaitis and Kobylyanskyi quickly feel at home in their new environment.

“I think the biggest part is them feeling like they’re a contributing member of the hockey program,” Handy said. “Do they identify with the culture that we have here, and are they willing to push themselves to see our team succeed? . . . They come here and work hard on and off the ice as immigrants here given the opportunity to get an education. When I look at myself when I came here in the mid-90s, I never would have thought I’d still be here 25 years later. For (Laukaitis) and I, the sport of hockey has given us this opportunity.”

Hockey is just a small part of Laukaitis’ vision for his life in America, however.

Growing up without much money, he has always wanted to be a successful businessman and hopes to work in real estate one day.

Handy is confident Laukaitis’ natural motivation will serve him well as he moves on from hockey and enters the workforce.

“(Laukaitis) is a hard worker in the classroom and on and off the ice to be able to afford to go to school,” Handy said. “He works hard, and he’s the type of guy who is really appreciative of all the opportunities he’s given here. Being able to go to school here and excel in the classroom – he really appreciates life and the opportunity to see the American dream. People who come here view the United States as lots of opportunities, and (Arturas) views it as a great opportunity to see himself as a successful business owner.”

As Laukaitis continues to play hockey for the Flames and looks toward his future career, he aims to one day have a house by the beach in Florida or California, leaving the cold weather he grew up with behind.

But the new people and cultures he has experienced across five countries constantly motivate him to keep exploring the world, wherever business or hockey may take him.

“I know a lot of people who are just from a small town, and (they’re content) with farming and staying in the same place and are afraid to go somewhere else – and there’s nothing wrong with that,” Laukaitis said. “But I like to explore new things, new places.”