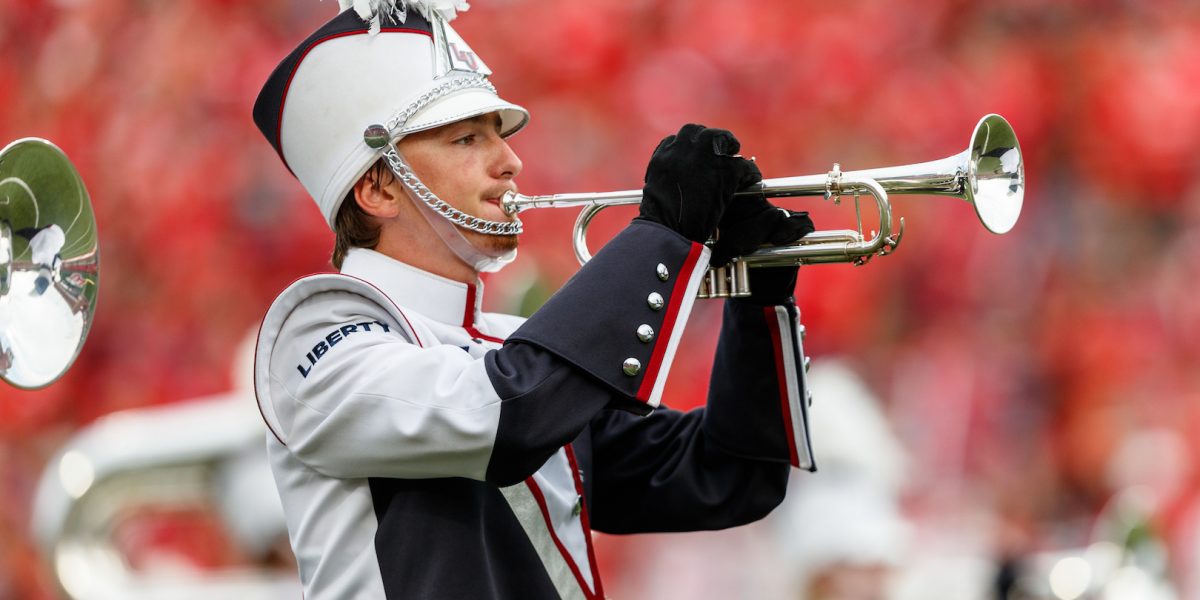 Marching band is not just a fall affair. Though the bulk of the season takes place between August and November, planning, organizing and auditioning for a band season is a year-long project for the Spirit of the Mountain Marching Band. Students, student leaders and paid staff begin the process of selecting and designing a new show each year in January, and auditions begin as early as March.

January 2019 was no different. This year’s halftime show, “Take Me Home,” was selected from 10 different ideas. According to Director of Bands Stephen Kerr, the theme was selected for its appeal to audiences from all different backgrounds.

“Our audience is Liberty University students primarily,” Kerr said. “But we also have the reserved side of people who come for the games, who are non-students, who are faculty or staff or townspeople or other people who come to the football events who are older than our students. So we choose music, some of which the students know and some of which the older crowd knows – people my age. That way, everyone has something in the show that they really appreciate.”

“Take Me Home” features music from all across the country and from all different decades, including “Country Roads,” “Sweet Home Alabama,” “The Devil Went Down to Georgia,” “Party in the USA” and “America the Beautiful.”

Field Commander Felicity Jenkins said that though her home state of Ohio is not mentioned in the show, the theme reminds her of her home state.

On top of its usual halftime performance, pregame show, tailgate performance and warm-ups at the Hancock Welcome Center, the Spirit of the Mountain will also be headlining Liberty’s annual homecoming parade at 2:30 p.m. Saturday, Oct. 19, just hours before the football game.

Home isn’t just a birthplace, though. According to Head Field Commander Aliza Nogueras, “Take Me Home” is a reminder of her home at Liberty as she completes her senior season.

“‘Take Me Home’ kind of signifies how these four years have led up to this last chapter,” Nogueras said. “We’re taking us home to our last season and looking back at all of the memories. This is what home is – getting to glorify Christ
together.”

The Spirit of the Mountain has a home, too. “Take Me Home” is a reminder of the band’s roots and traditions, which trace back to the band’s founding in the late 1970s. These traditions are not show theme-centered, but rather centered on the students who take part in the band.

Some of these traditions are as simple as maintaining a uniform appearance among the band members. Others are student-focused, such as creating a space at practice where the band’s members can simply focus on music and marching and forget about the stress of classes and life.

The most important tradition, Kerr said, is the spiritual theme the band develops each year. Each year’s theme is a simple phrase with a big meaning – past themes have been “go the distance” or “after God’s own heart.” This season’s theme is “edify the band of Christ.”

Kerr said the tradition is one he’s kept with the band since he became director of bands 20 years ago, and it’s one he hopes to keep for a long time.

“There are some things that we’ve done in our band historically that some of the older alumni will remember, and part of that is a spiritual theme,” Kerr said. “I think it’s important for me as the director to make sure that we do not forget our foundation in Christ, and it’s something that is of immense importance to us. It’s more than tradition — it’s who we are. I don’t want people to say it’s tradition that we have a spiritual theme – I want it to be part of our culture.”

The Spirit of the Mountain returned to campus Monday after a weekend trip to New Jersey and Pennsylvania to perform at several different events, including high school band competitions and an exhibition at Dorney Park in New Jersey. The band will be playing “Take Me Home” toward Carter Tower during halftime at Liberty’s homecoming football game.