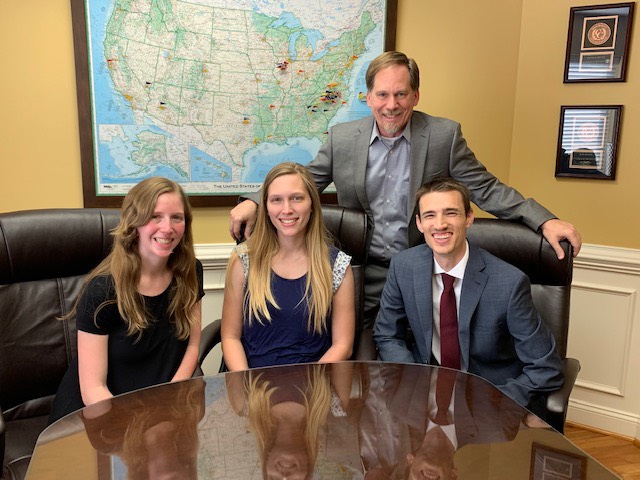 Triumphant Portfolio Management, LLC (TPM) is a unique asset management company with headquarters in Lynchburg, Virginia that applies biblical principles to all facets of its operations. A few Liberty University graduates were hired at TPM following graduation.

TPM was founded by Jon and Karen Benet. Their goal in starting the company was to bring glory to God in how they serve their clients by investing their money in a wise and biblically responsible way and by openly sharing the truth of the gospel through work each day.

Jon Benet said they named the company “Triumphant” as a reference to and a constant reminder of Christ’s eventual triumphant return. Their motto is the Bible verse Proverbs 3:9: “Honor the Lord from your wealth.”

Benet talked about how amazing it is to have Liberty students come work at Triumphant after they graduate.

“As an employer, we feel the product Liberty produces, the graduates, is an excellent product,” Jon Benet said. “It has been our experience that Liberty graduates possess the positive qualities that we look for as a business owner: Christ-centered, compassionate, well-educated and ethics-driven.”

Liberty students left such an impression on the Benets that they decided to relocate their business from North Carolina to Lynchburg in 2017. Two of their own children earned bachelor’s degrees from Liberty in 2012 and 2014.

“We are so excited about what God is doing at Liberty, especially through the Center for Financial Literacy under the leadership of Dr. Stacie Rhodes,” Jon Benet said. “We feel the Lord has confirmed our decision to move our business here, and we are delighted with the new building for the School of Business.”

Triumphant has hired six Liberty graduates in various roles since moving their headquarters to Lynchburg. A 2016 graduate, Matthew Stram, has been the Director of Business Development for Triumphant since March 2019. He met Jon Benet at a church men’s group.

“Jon and I go to the same church,” Stram said. “I was already in the business working for another firm. We started talking and found out we had a lot of the same goals and values. We decided earlier this year to team up and work together.”

Stram appreciated the education he received at Liberty because of the Christian worldview.

“I think it’s really important to get knowledge from a Christian perspective,” Stram said. “Before Liberty, I went to a secular school in southern California. Paul says you’re either a slave to sin or a slave to righteousness. I believe getting a Christian education is the way to go if your goal in life is to glorify God in all you do.”

Natalie Obenchain works for Triumphant as a stock market research analyst. She graduated from Liberty in 2014 and was a middle school math teacher in southwest Virginia before working for Triumphant. She said her Liberty education helped a great amount when selecting her career.

“I enjoyed Liberty because you really get to know your professors one-on-one. I had a specific professor that helped me in the math department and taught to my strengths,” Obenchain said.

As a stock market research analyst, Obenchain’s job is to watch growth stocks carefully and communicate her findings to her team each day on which ones may be worth investing in based on specific stock market technical criteria.

The TPM director of Marketing and Social Media is Amanda Coleman, who graduated from Liberty in 2012. She originally worked in Louisiana as a media consultant with a home health care agency creating social media presences and billboard designs.

“I enjoy being able to publish Mr. Benet’s articles on different social media platforms that reach so many people,” Coleman said. “We moved our family back to Lynchburg so my husband could continue his degree at Liberty. Triumphant allowed me the flexibility to work from home so I could raise our kids. I also really love the values Triumphant holds.”

The Triumphant team tries to live each day with a quote by Jerry Falwell, Sr. in mind: “If it’s Christian, it ought to be better.” By serving others first, seeking God’s will and hiring employees with a strong faith and good work ethic, Triumphant champions Liberty’s values.