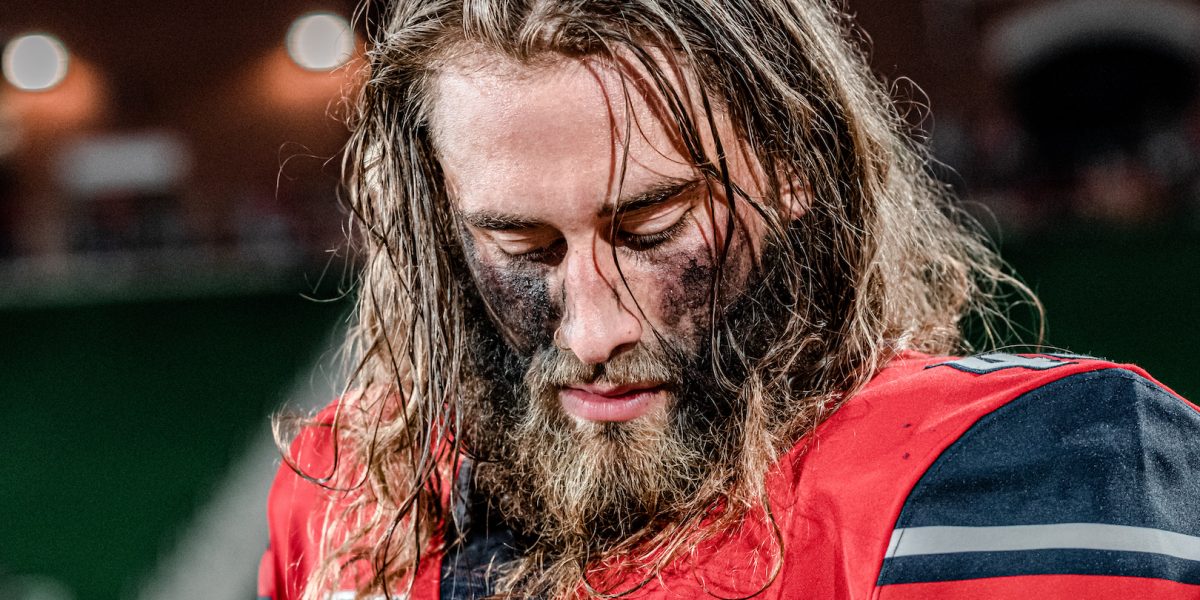 The sun beat down on Williams Stadium on the last day of August and Flames fans were left singed Saturday when the Liberty football team was shut out 24-0 at home by the Syracuse Orange.

Williams Stadium saw its third-highest attendance ever with 21,671 in attendance, including more than 7,000 students and a sold-out club seating section.

The loss was a disappointment to many Flames fans after a summer’s worth of anticipation, particularly when the loss came from an underperforming offense, especially under an offensive guru like Head Coach Hugh Freeze.

The Flames offense earned a total of 238 passing yards and a dismal negative-4 rushing yards, while Syracuse earned 176 passing yards and 192 rushing. The offensive play was marked by simple mistakes and turnovers, including a fumble on the 4-yard-line that cost the Flames a touchdown.

According to senior wide receiver Antonio Gandy-Golden, the offense’s bad performance came down to poor execution, rather than a lack of skill or being outmatched by Syracuse.

“What’s the most demoralizing is, as much as we know we can get it done, it’s kind of disappointing to know that we didn’t execute the way we should have,” Gandy-Golden said. “We came off with good heads, good hearts, and we said we’d get it next drive. … The small things matter, and there were some small things that we could not get right that changed the play.”

The game was not a total loss, however. The Flames defense, led by redshirt senior Elijah Benton with 13 tackles, played strong the entire game, holding the Orange to 368 yards and keeping constant pressure on Orange quarterback Tommy DeVito.

Redshirt senior defensive end Jessie Lemonier said that despite the amount of time the defense spent on the field and the losing score, the team continued to
play strong.

“I could tell there was some frustration, but I told everybody, ‘Keep your chin up, we got each other, so there’s no time to pout or anything and we’ve just got to keep pushing them,’” Lemonier said.

According to Freeze, the game was both a disappointment and an encouragement.

“I’m disappointed in a lot of things, obviously, but I’m also encouraged by some things,” Freeze said. “I thought our defense took a huge step forward from last year in the way that they competed. I thought they played really solid against a top-20 opponent and really gave us a shot, if we had anything offensively, to be in the game.”

The game was Freeze’s coaching debut with Liberty, though fans didn’t see him on the field. Freeze was brought into the stadium via a wheelchair and instead coached from a hospital bed positioned in the Carter Tower coaches’ box.

Freeze, who was still suffering back spasms this week after undergoing surgery for a herniated disc, remained in the coaches’ box for his comfort and recovery. Freeze called first- and second-down plays from the box and provided his postgame press conference via video.

“It’s different — it’s odd that I’m not down there talking to officials and calling timeouts when we need to, and I’m having a harder time finding clocks when I need to,” Freeze said. “It was a little different – I don’t like it near as well as being down there eye-to-eye with our players, and hopefully I’ll be back down there very soon.”

Both Freeze and senior quarterback Stephen “Buckshot” Calvert said Freeze’s absence did little to affect the team, though Freeze said his two-week absence had likely impacted the players.

“I think me being gone for two weeks probably had an effect somewhat on some things,” Freeze said. “And I think if I was on the sideline tonight I could have talked to Buckshot a little bit more about his drops and his footwork.”

Despite the rough performance from the offensive side of the team, Lemonier said there were no hard feelings amongst the players.

“It wasn’t our day. Everyone has their days to be good, and this wasn’t their day,” Lemonier said. “There’s no hard feelings or any blame put on them. It’s all about unity, so we have to stick together. If they mess up, we can’t just blame them for it. It’s for everybody collectively because defensively we could have done more to help them out and vice versa.”